So, I recently celebrated one of  those "milestone" birthdays. My wife had a couple of the lady friends make this cake for the party. Had about thirty five family and friends over. The weather cooperated so we had people inside and outside. 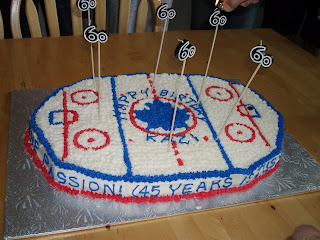 In lieu of gifts, we requested a funny card and a donation to the Brantford SPCA or charity of their choice. Of course, what's a birthday without cards (of the sports variety). Received some UD hockey series1 & 2 blasters and rack packs. The best card was a Cody Hodgson Young Guns canvas card. But lots of fun opening packs.
Also, the son-in-law moved back to Ontario from B.C. and gave me some cards from his childhood. 175 OPC basball 1979, 27 OPC WHA hockey 1974/75, 8 OPC WHA hockey 1975/76 and 3 OPC baseball 1980. Nice little haul here.

From one of my artist friends, he made me this mixed media 8 x 10 picture. He said he took the image off an old program. 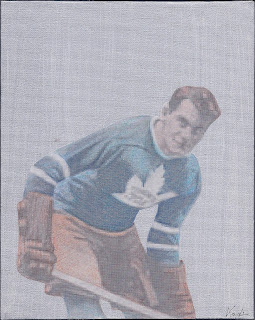 Right away I said it's Syl Apps.

As he was a Paris born player, this was a no brainer.

And last but not least, I received this item.

My wife is mentoring a young student
She works at McDonald's and one of the frequent guests is none other than W. Gretzky (Walter that is). There is always a commotion whenever he comes in, so she learned who he was. She had waited on him a few times and she was one of his favourites. He said she looked like a young woman he went out with when he was 20. One day, he asked her if she wanted any hockey related items and she said no. Apparently Walter carries around posters, keychains, cards and the like. He then asked her if she knew anyone who liked hockey and surprise of surprises, somehow she thought of me. She told him I had a lot of cards and a room full of hockey memorabilia. He said that he had some photos autographed by Wayne. He asked for my name and wifes name. He already knew hers from her name tag. He came back a few days later with the following. 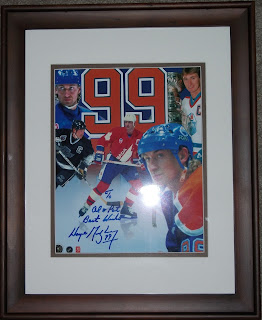 Now Walter wrote in the inscription as the writing is a bit different and the sharpie's colours are a little different. Now she also received one and the two Wayne's signatures appear different so I believe they are authentic. A nice and unexpected gift. As they say, it's the thought that counts and this one sure did.
Now Walter is in again and she tells him I'm going to feature this in a blog. So he gives her his cell phone number and says I can give him a call. I phoned him and thanked him for his largesse. He was actually on his way out as I could hear his company, he told them to go out and wait for him as he would be a few minutes. I didn't want to hold him up so I again thanked him and asked if I could call back another time. Yes means I will. This is one of the good things that have happened to me recently. More in an upcoming post.
Posted by hockey kazi at 7:13 PM