Selected in third round
by Los Angeles Kings number 36
overall in the 1972 NHL Amateur Draft.


Dave Hutchison was a rugged and reliable defenceman throughout his 12-year professional hockey career. In 584 regular season games, he totaled 116 points and 1,550 penalty minutes. He was a role player, an aggressive stay-at-home defenceman who was often paired with an offensive minded defenceman. In fact he was the defensive conscience of two of the top defensemen of his time: Borje Salming and Doug Wilson.
Hutch settled back in the London, Ontario area after retiring. He would find success as a real estate agent. 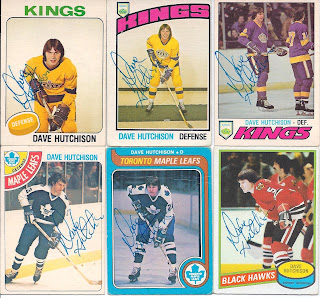