Selected by Toronto Maple Leafs round 3 #17 overall 1964 NHL Amateur Draft.
To watch Mike Pelyk skate as a junior for the Toronto Marlies in 1967 was to assume that he would be a prize on any NHL blueline. He moved with ease from point A to anywhere on a set of wheels worthy of a Corvette. And when he got where he wanted to be, he could dish out tough defense and chip in with timely offense.

His transition to the majors with the Toronto Maple Leafs was less auspicious, however. His flashes of brilliance were usually followed by defensive lapses that could only be cured through the acquisition of maturity and experience. Pelyk spent six-and-a-half seasons pursuing those qualities while delighting and frustrating Leaf fans and management along the way. His skating style was not unlike that of Frank Mahovlich. He could cover so much ice with so few strides that from the stands he appeared to be a floater with insufficient perspiration on his face. As such, he often became the object of the Garden's boo birds.
But as the Leafs turned the corner into the 1970s, Pelyk's maturing process appeared a little more like a feast than a famine. By 1973-74, he was finally looking like a blueliner worthy of acclaim. But no sooner than kids were no longer embarrassed to assume his name in a road-hockey game, the real Pelyk jumped to the WHA. 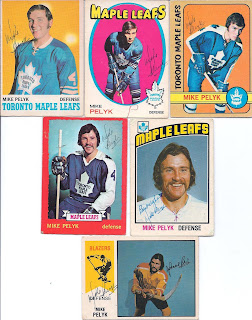 Return envelope dated 1987. Now how many of these do you think there are in existence. Coupons for a free quarter pound single hamburger from Wendy's authorised (signed) by Mike Pelyk. I think they might be three 1/1's.
Posted by hockey kazi at 10:39 PM