Posted by hockey kazi at 8:33 PM No comments:

COLUMBUS — Jessica Shannon felt the Senators’ pain Wednesday.
Literally.
The wife of winger Ryan Shannon — who was in a lower-bowl seat at a sold-out Scotiabank Place watching a 4-0 loss to the Carolina Hurricanes — went home with a special souvenir from the “four or five” posts the Senators hit.
Against all odds, the gift was from her husband.
“When I hit the crossbar, the puck went over the netting and landed on my wife’s lap,” Shannon said Thursday of the third-period scoring chance. “She’s got a bruise on her left thigh. She was pissed off. She’s like, ‘I’ve got a bone to pick with you.’
“Out of 20,000 people, it hit my wife.”
Shannon was quick with a quip when asked if he was aiming at his bride.
“There was a Toronto Maple Leaf fan sitting next to her,” he said. “But i missed by a couple of inches.”
There’s a Part II to the story.
Earlier in the season, during a game in Philadelphia, Shannon took a shot that went in the crowd and hit a little girl right over the eye. Her name was Isabelle.
“My wife was reading an article earlier in the day (Wednesday), about an anorexic model from Italy,” said Shannon. “Isabelle something. I forget her last name. So she was thinking about Isabelle before she went to the game.”

Like, I could sit there and be one of two people and not get hit. Go figure
Posted by hockey kazi at 9:40 PM No comments: 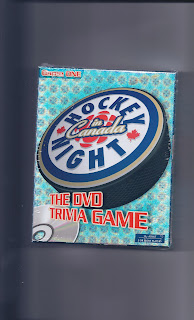 HOCKEY NIGHT IN CANADA DVD TRIVIA GAME
All Your Favorite Personalities! All the Great Moments!
From Foster Hewitt to Ron and Don, Ward Cornell and Howie Meeker, this DVD game spans the storied history of Hockey Night in Canada.
Fast-Paced Trivia Challenge!
Relive the classic games, unbelievable plays, and outrageous commentary that have made CBC's Hockey Night in Canada a national treasure. Take it "one game at a time" with trivia on rare HNIC footage, audio clips, and visual puzzles from over 50 years of broadcasts. Hockey Night in Canada DVD Trivia Game is sure to test rookie and veteran hockey fans alike.
End-to-End Game Play!
AMAZE


Anytime you get anything hockey, it's a good day
Posted by hockey kazi at 9:06 PM No comments:

Received from my youngest daughter Lyndsay an autographed copy of Don Cherry's Hockey Stories, Part 2---this will go together with my autographed copy of  "Grapes", A Vintage View of Hockey--gee, one from 1982 and one from 2010
AMAZE---still alive,kicking and entertaining (him, not me) 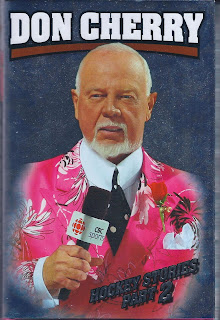 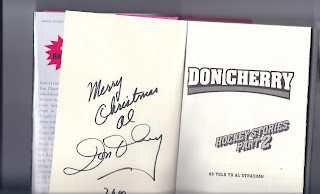 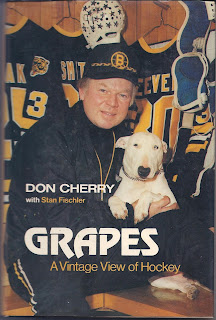 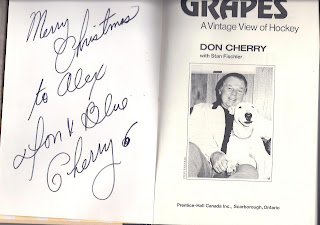 Posted by hockey kazi at 9:26 AM No comments:

I started collecting hockey cards again in 1980, after collecting as a kid in the 60's.(My mom didn't throw them out--she gave them to my cousin) Also started sending TTM for hockey autographs during this time period. I have a hard time not buying anything hockey related, whether it be cards, books, photos etc. Anything  that has to do with hockey-I'm your man

Will try and share some things that amuse, confuse and amaze--Enjoy
Posted by hockey kazi at 9:12 AM No comments: