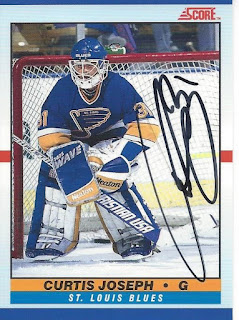 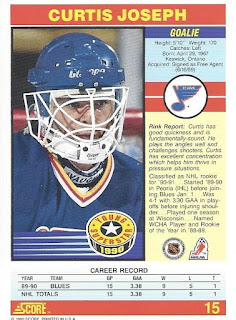 He has the most career wins of any goalie who never played on a Stanley Cup winning team. Also the first goalie to have 30 or more regular season wins for five different teams.

I've scanned in the card I got signed IP last year.  As a long suffering Leafs fan, he did bring us to the playoffs but not the promised land. I have a very difficult time labelling him a superstar. Star yes . My opinion. 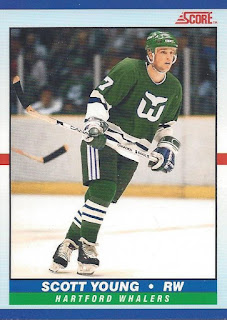 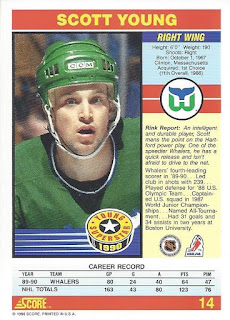 Selected 11th overall in the 1986 NHL Entry Draft by the Hartford Whalers. Also played for Pittsburgh, Quebec, Colorado, Anaheim, St. Louis and Dallas. Was a member of the 1991 Pittsburgh Penguins and the 1996 Colorado Avalanche Stanley Cup winning teams. He played in three world juniors, three Olympics, three world championships, the 1996 World Cup of Hockey and twice with the US national team's regular season. He was an All-Star defenceman at BU but spent most of his professional career at right wing. Scott was a reliable performer who had speed, a heavy shot and ability to read plays made for a long NHL career.

In my opinion, I don't consider him young (except for the surname) or a superstar.

Posted by hockey kazi at 4:52 PM No comments: