For season 1, episode 2, we bring you a homage to Reggie Dunlop.

A Saguenay, Que., hockey coach who punched a 16-year-old during a brawl last weekend in a Midget A game has been given a 10-year suspension.
André Harvey was one of two coaches and three players who were involved in the fight.
Video obtained by the CBC's French-language service showed the brawl involving several players in the final seconds of a Saturday night game between the Chicoutimi Cougars and the Jonquière Pumas.
A referee trying break up the fight was knocked down and players are shown striking him while he was down.
With players fighting near the Jonquière bench, Harvey throws a punch that appears to strike a 16-year-old Chicoutimi player in the head. Three players and two coaches were handed suspensions earlier this week, but the length hadn't been determined.

Harvey told the Quebec Ice Hockey Federation's regional disciplinary committee, which met Thursday night to discuss the case, that what he did was wrong and he regrets his action.
Jean Côté, the father of the teen who was hit during the brawl, had called for a lifelong suspension of the coach.
Hockey Quebec previously said the league only issues suspensions for a fixed time period.
On Friday, it issued a statement saying an apology isn't enough. It said the coach had a responsibility to set an example and that his behaviour violated the basic principles of amateur coaching.
"A coach has to know that he plays a crucial role at all times and has great influence on the people around him," the statement said. "He must play an educational role with respect to his players and show respect in his demeanour. This action went against the principles we look for when a coach gets involved in a sport, in any sport."
Côté said his son chose the Midget A league because he wanted to play non-contact hockey. He had suffered nine concussions while playing in other leagues.

And all this without any of this.

Reggie Dunlop: I am personally placing a hundred-dollar bounty on the head of Tim McCracken. He's the head coach and chief punk on that Syracuse team.

Oh, it's Go On. Darn. My hopes are dashed.
Maybe Goon would be a good candidate for a reality type show. Now, during the lockout, it could feature what this type of player does during time away from the game. Lets take Edmonton Oiler Ben Eager for example.

What has Mr. Eager been up to? The same, only different.
Posted by hockey kazi at 9:46 PM No comments:

Charlie Sheen, not WINNING my contest.
1967ers at Diamond Cuts and Wax Stains did.
http://1967ers.wordpress.com/

Tommy Williams played in 399 NHL games, scoring 115 goals and 138 assists for 253 points.
He correctly identified Tom Williams the younger as the former NHL'er I met unexpectedly on my holidays. We had a nice long chat on his time with the Hamilton Red Wings and my classmate who played with him, Pete Bartkiewicz. He told me the reason he signed with Hamilton (he was being pursued by other junior clubs) was his family was given a bonus to sign with them. We also talked about the upcoming (soon to be cancelled )Winter Classic as he is actively involved with the Red Wings alumni. The conversation just drifted around hockey talk. Discussed playing professional hockey, the changes and players he played with. Overall, a fun time that was an added bonus. I don't think its a common occurence and probably won't happen again. I do have some previously autographed cards of his from IP signings at the Original Six tourneys in the 80's. I still need the league leaders card signed and I'll see if he'll sign a photo of us together. He told me he gladly signs all requests sent to him as long as there is a SASE. His address is correct on hockey db boards but if you need it, let me know. Had fun with this little contest and will have to come up with another idea for my next one. 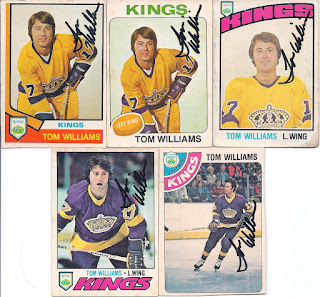 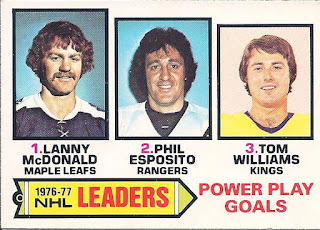 Will send and get this signed.
Posted by hockey kazi at 6:29 PM 1 comment:

Woo hoo. NHL score to report.
Toronto Maple Leafs    8
Pittsburgh Penguins      6
Unfortunately it's from 1989
However, I will share this wirephoto from my collection from the game.. 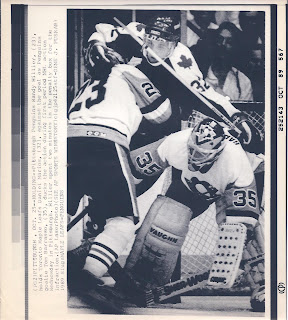 Here are the prizes for my little ongoing contest and some more clues. 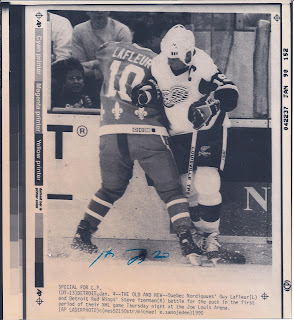 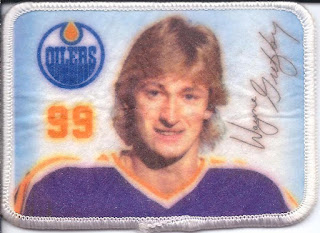 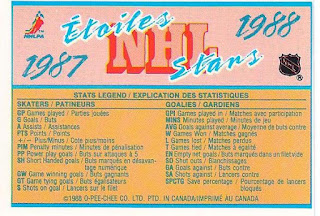 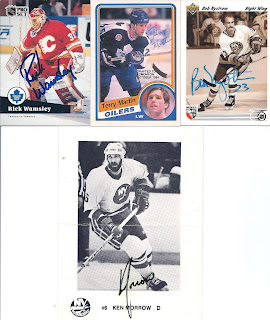 Recap of clues
First Clue
Who am I?

He played junior hockey in my hometown. Long time readers might remember that I've mentioned my hometown a few times. Sidenote:One of my team and classmates for five years, got called up from the junior B's and played with this player for five games.

He had nine total OPC and Topps cards

He was ROY in his first year of professional hockey.
He was selected in the second round of the amateur draft.
He played in three different professional leagues.
New clues
This player was traded to the St. Louis Blues but never played for them.

Often confused with an American born player with the same name.
I may have to post more wirephotos if this lockout continues.
Posted by hockey kazi at 10:53 PM 2 comments:

Canada's favourite broadcaster, the CBC, put five classic games (memorable games from any era, including regular-season and playoffs, all-star games, and international match-ups) on its website and asked fans and viewers to vote on what they would like to watch on Saturday night. The first week’s voting is closed, with now the only suspense being the winner, and week two’s games are now up for your choosing. Over 80,000 people voted the first week.