It toque me by surprise

I didn't realize what was in this package. Inside the plastic bag, I could feel some soft material. I couldn't remember anything that I had coming in. Only way to figure this out was to rip this sucker open. 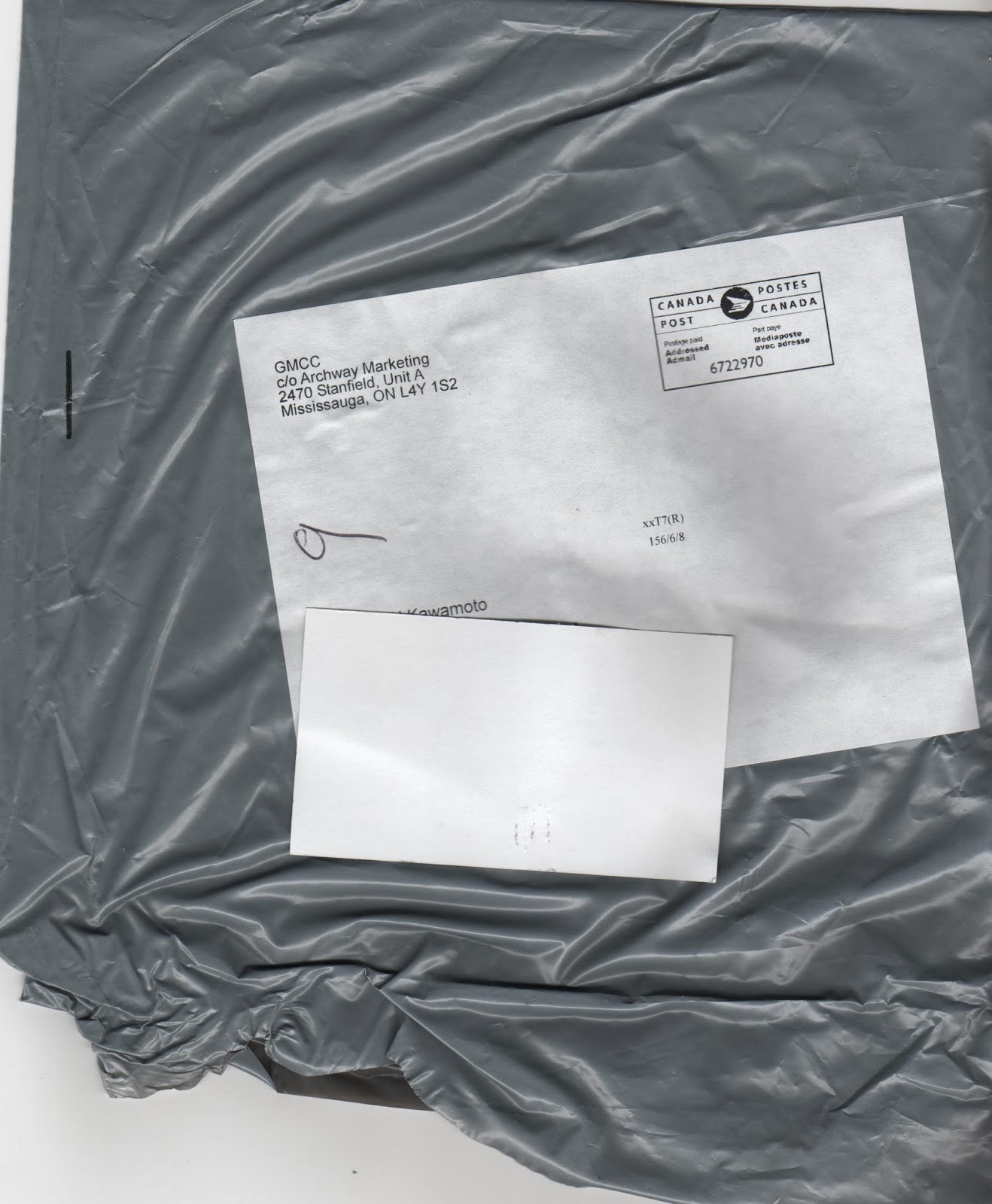 General Mills Cereal has a hot deal! You can now redeem your pins for a FREE Team Canada Toque from General Mills! Pins are available on specially marked General Mills cereals.Hurry, just 330,000 toques are available. This General Mills offer is good while supplies last or until Tuesday, December 31, 2013 or whichever comes first. Limit of 5 toques per household. Enjoy

Oh yeah.  I had completely forgotten about this offer. Now when my wife does the shopping, she doesn't look on the boxes for coupons or special offers. When we were buying the cereal, she just picked up a box of what we wanted. I exchanged it for the box with the toque offer. she countered with why would I need another toque. Of course, my great comeback was why not. In this case, I want to cheer on Team Canada at the 2014 Olympics.
Mine didn't look exactly as illustrated. 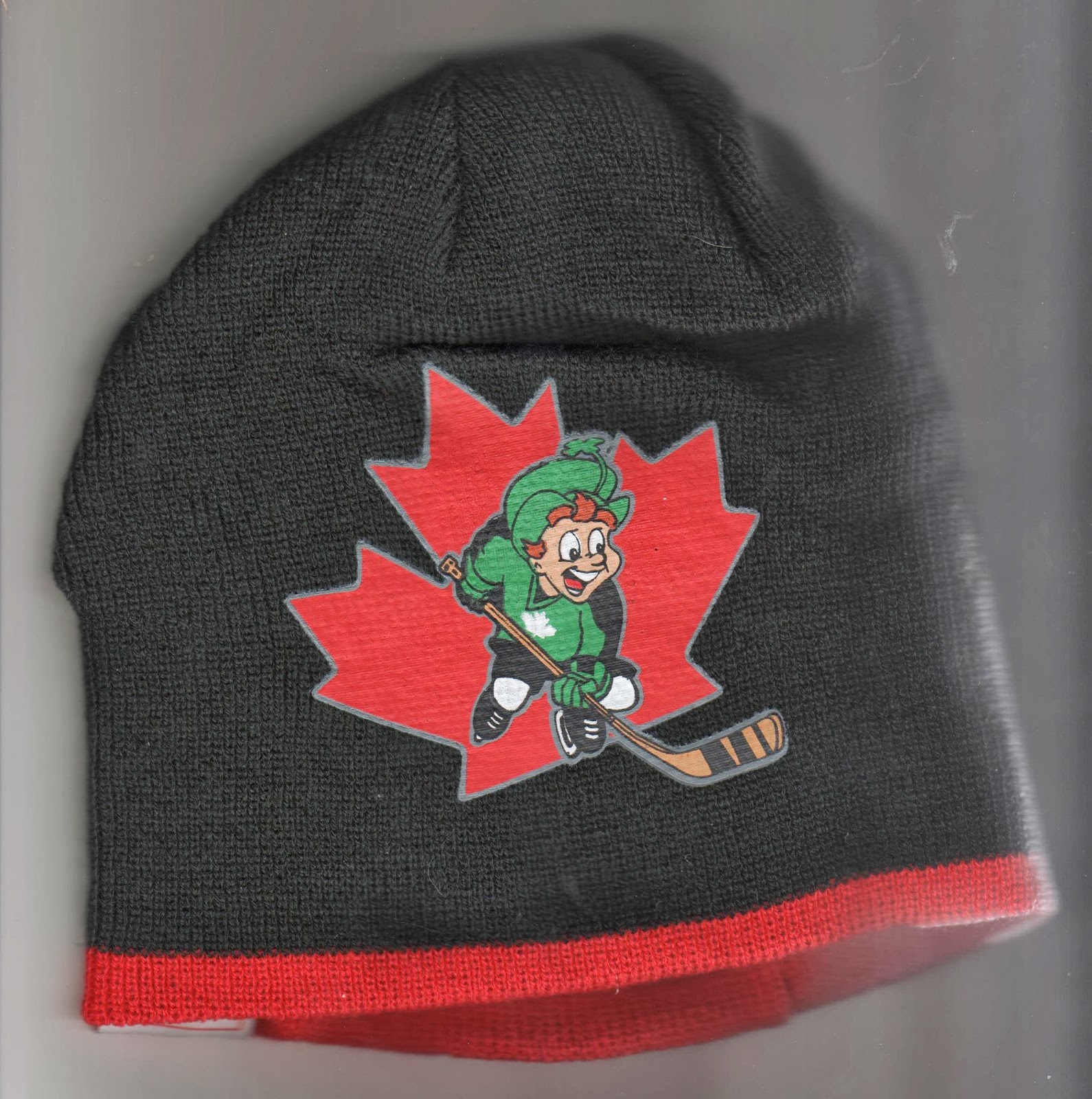 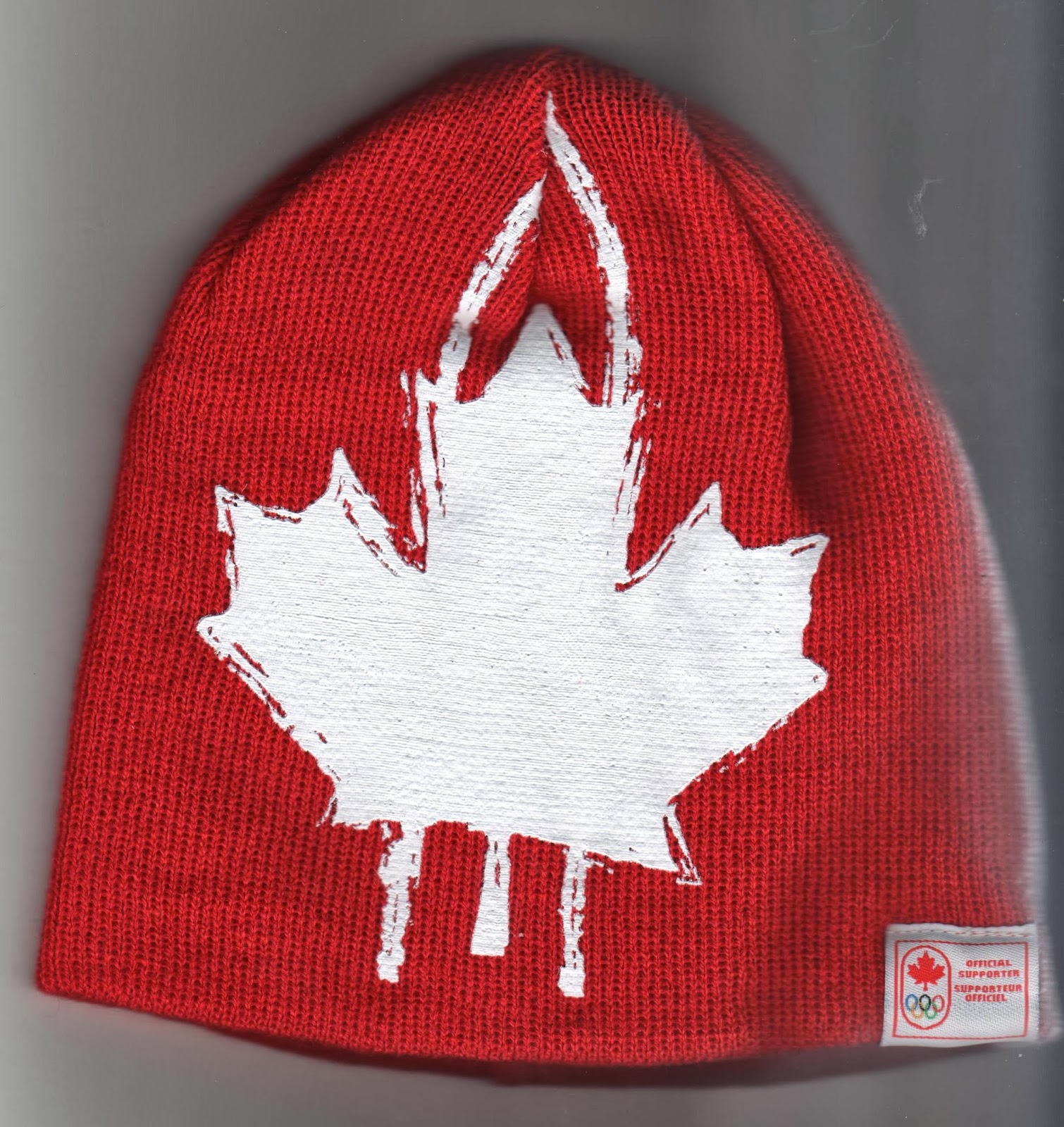 Not so the reverse. The Canadian Maple Leaf side left a little something to be desired. But I guess for free, I shouldn't complain.  Don't think I can take a photo of the rest of my toques. I quickly found 12 different and I know there's more stored away.

This show finds participants trying to sell their valuable objects to one of Canada's leading antique buyers for top dollar. Each person presents an item, makes their case and then meets with a buyer in a room to negotiate the price. This is where intuition and greed come into play. The seller can turn down an offer, but if they leave the room to press their luck with another buyer, there is no going back. Essentially they can hit the jackpot or go home empty-handed.

Hockey Day in Canada has come and gone for another year. Leafs beat the Canadiens Saturday night so all is well at the centre of the hockey universe. For the events I wrote about in my previous post, I didn't get to Hockey Day in Brant. I also didn't make it to any card shops to pick up free packs from  UD's National Hockey Card Day promotion. But I did manage to get to Toys R' Us and get the special 8 card sheets. Before I saw them all, I was wondering how the sheets would be printed. With 8 cards (plus checklist card) on a sheet and twenty cards in the set, the math doesn't add up correctly. Two complete sheets (16) and with 4 cards on the third sheet, what would make up the other four spots. Ad cards promoting other UD products? Perhaps promo cards ?  Maybe special offer cards of some kind. No. They printed at least four different sheets before you could get a full set. This leaves 12 extra cards that would be duplicates.

Here they are in all their uncut glory. 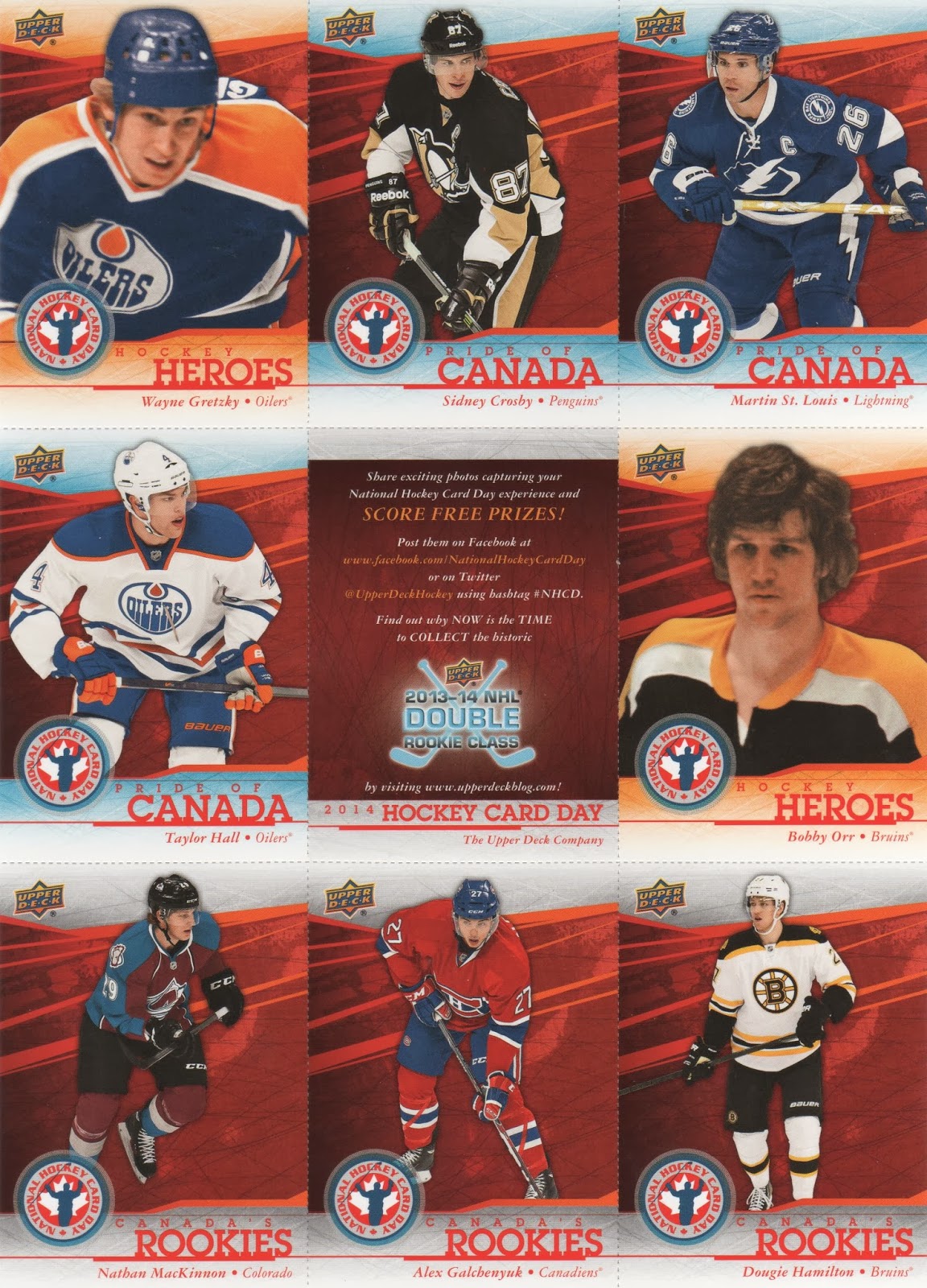 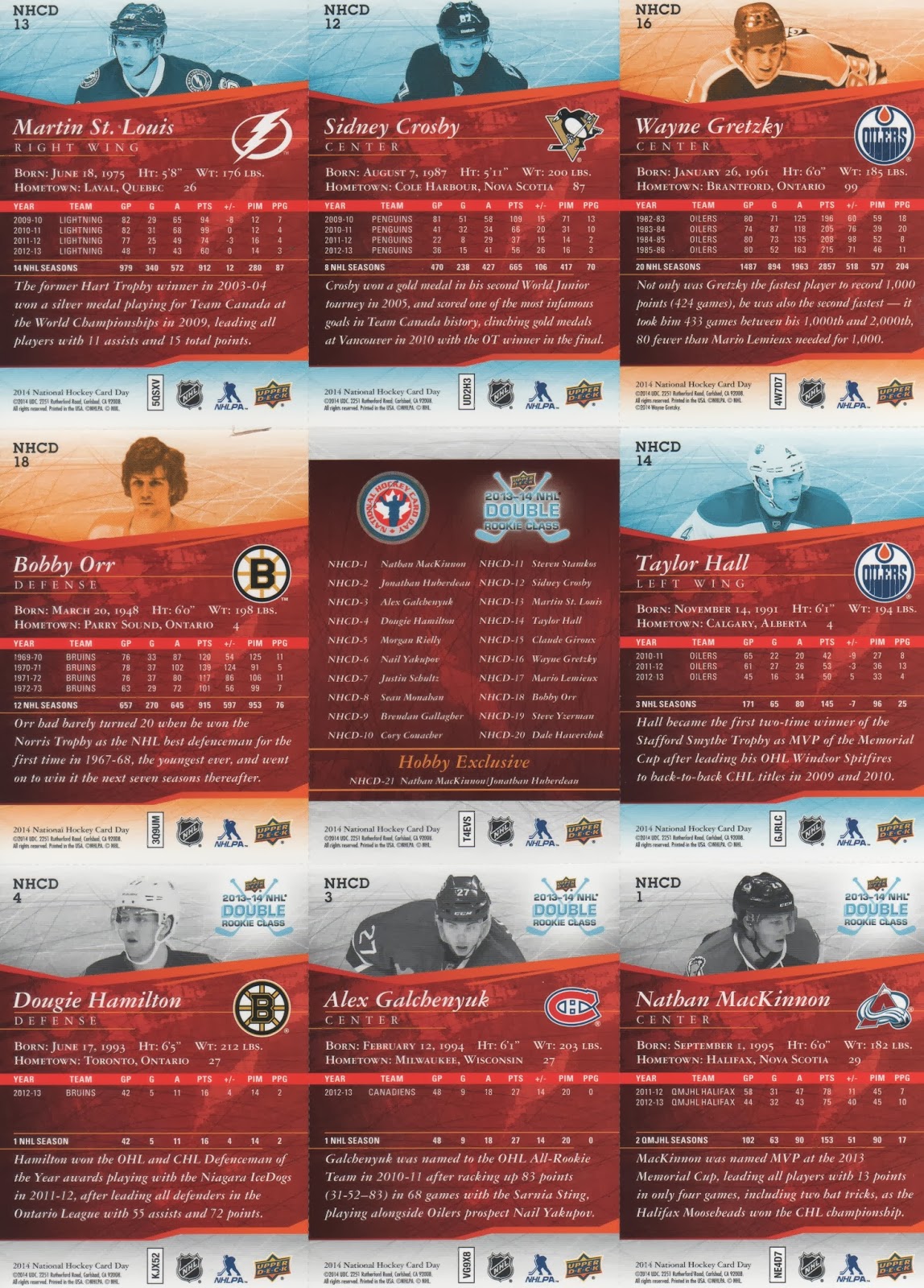 Sheet 1 front and back 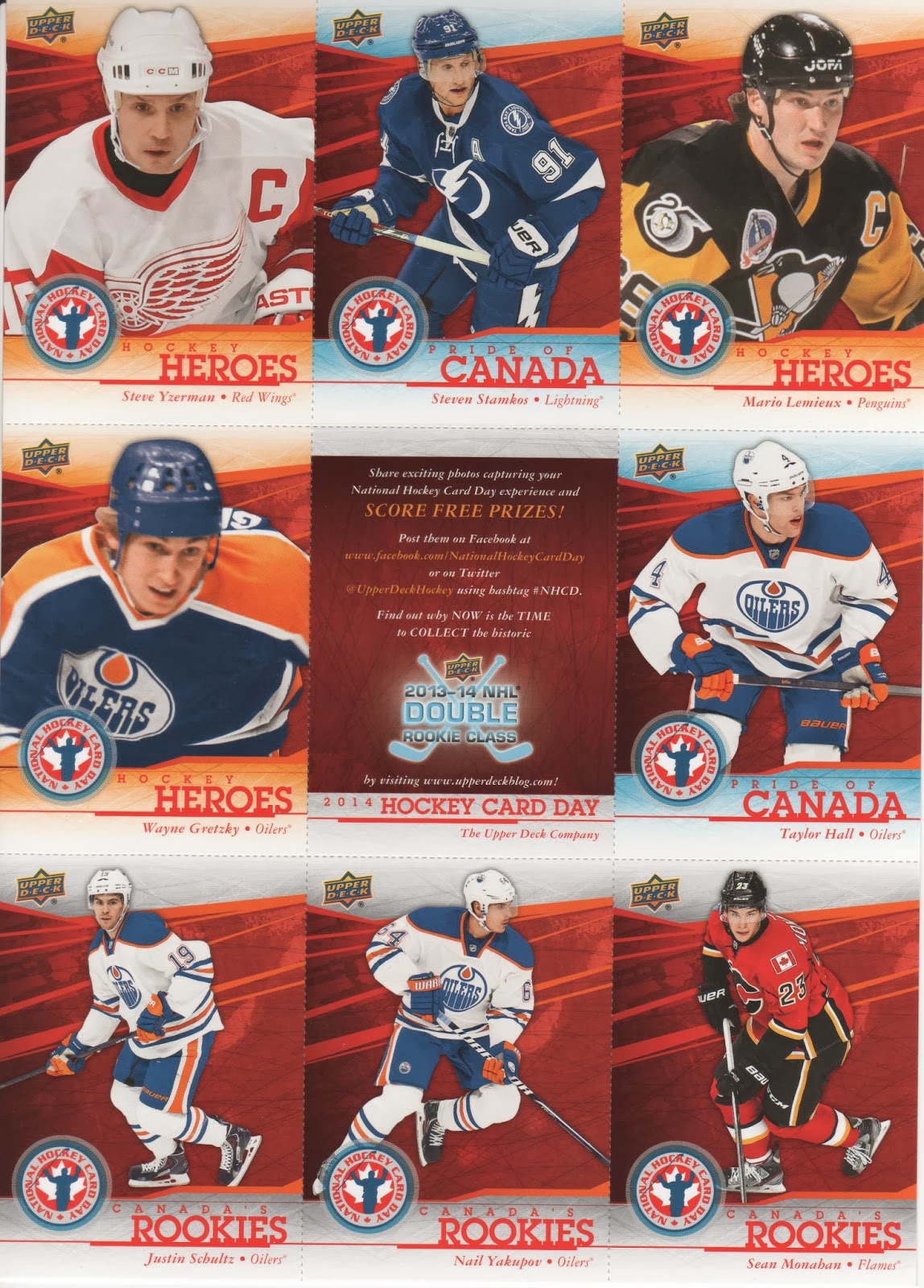 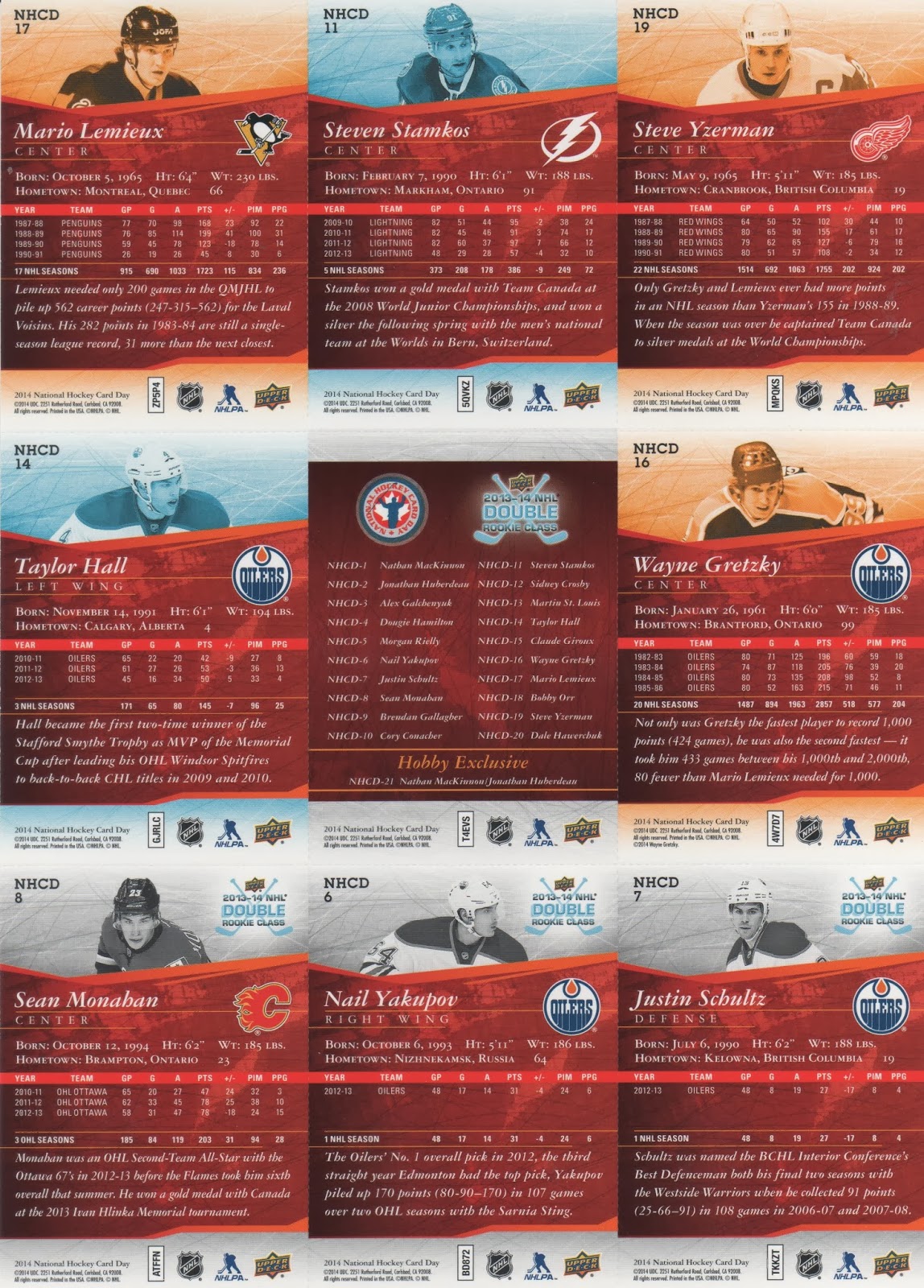 Sheet 2 front and back-- Schultz 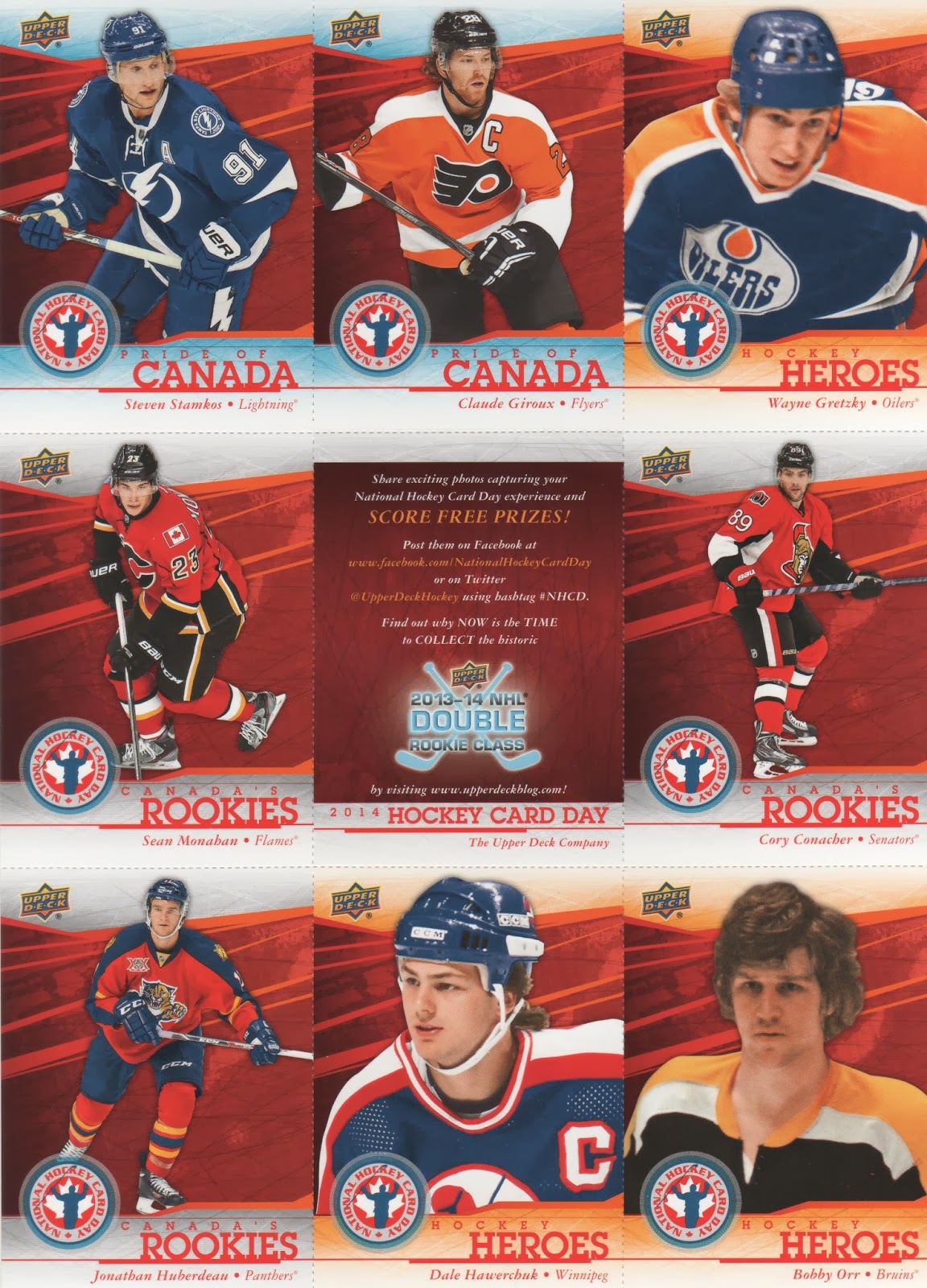 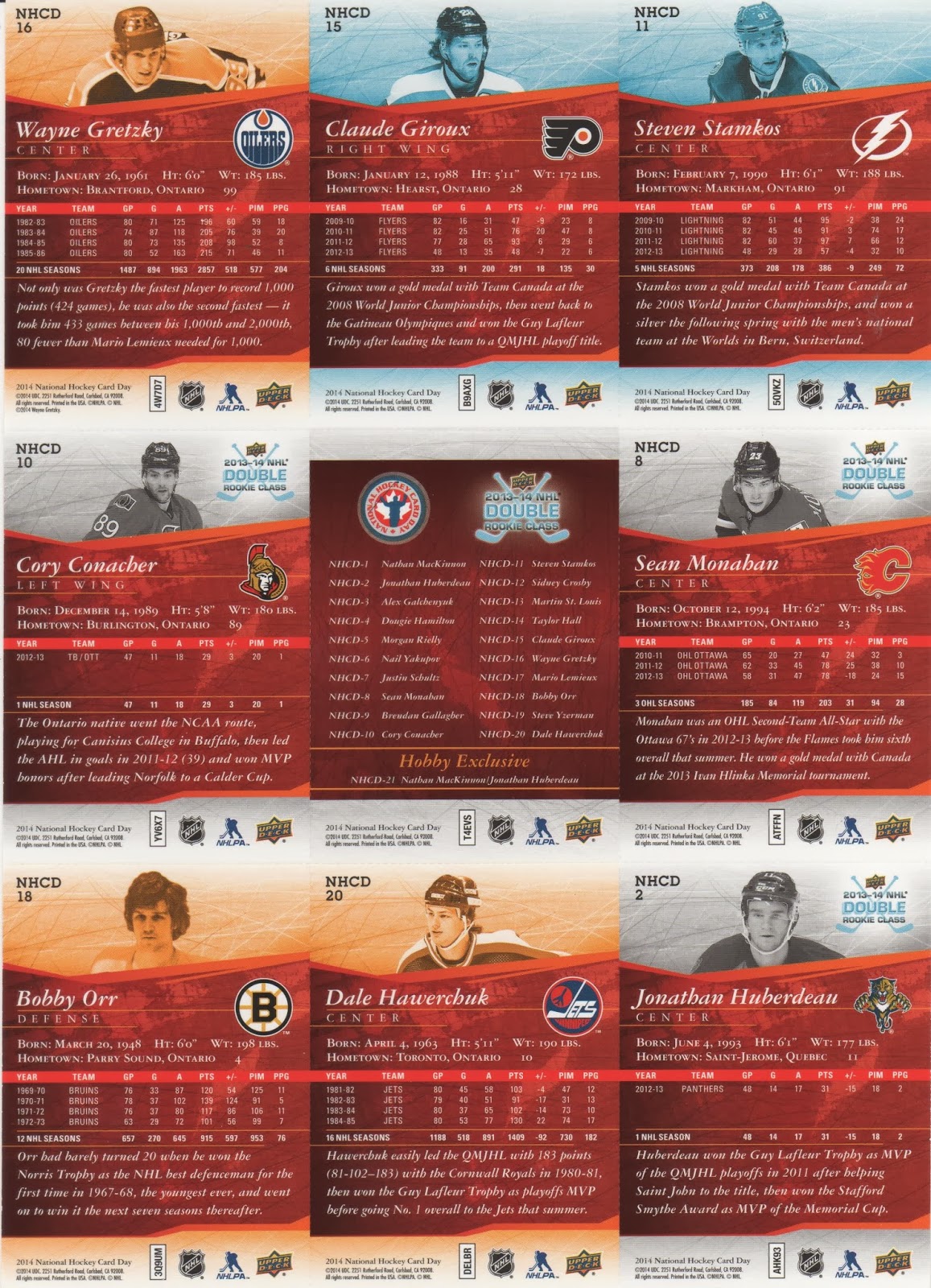 Sheet 3 front and back 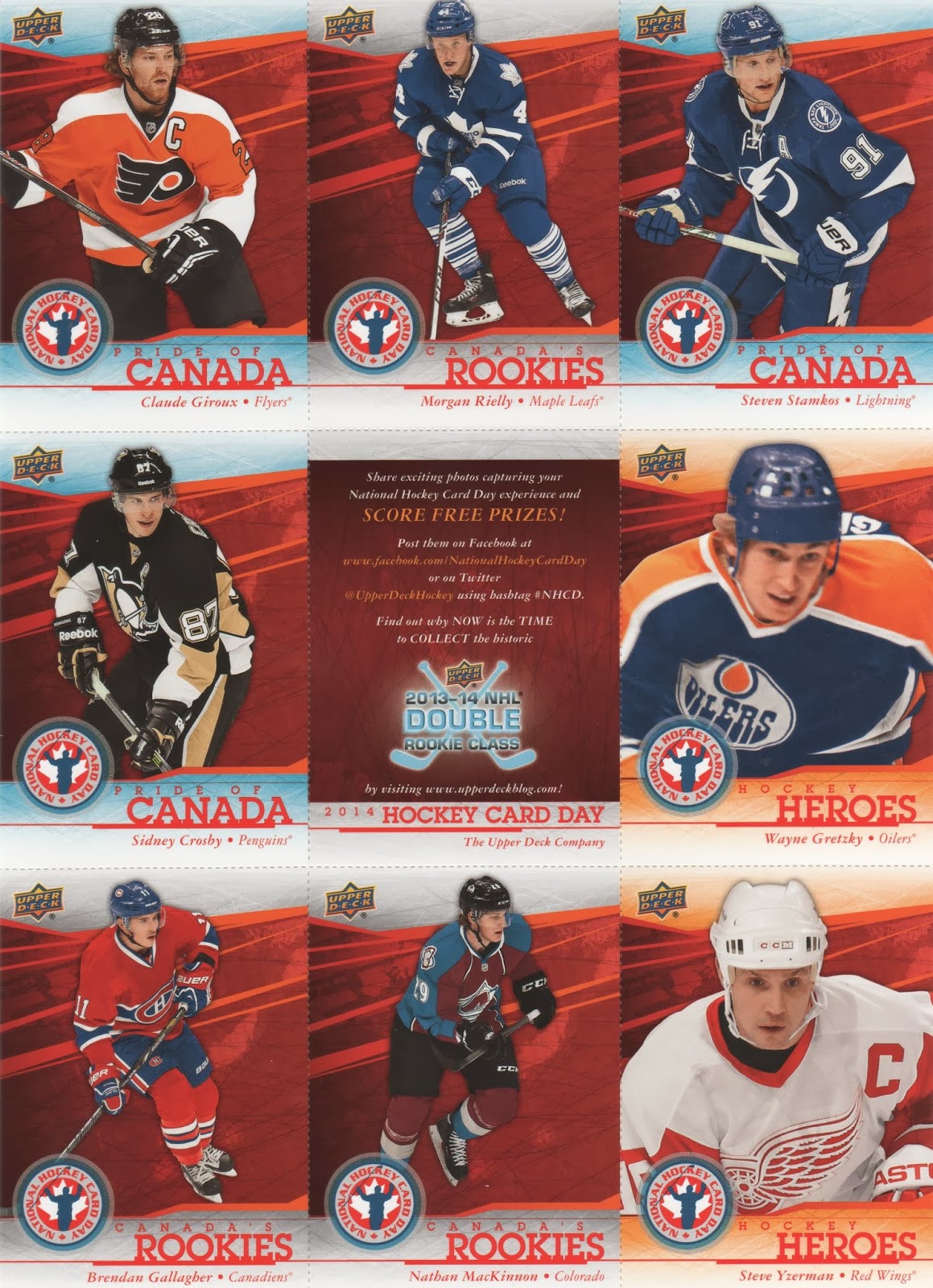 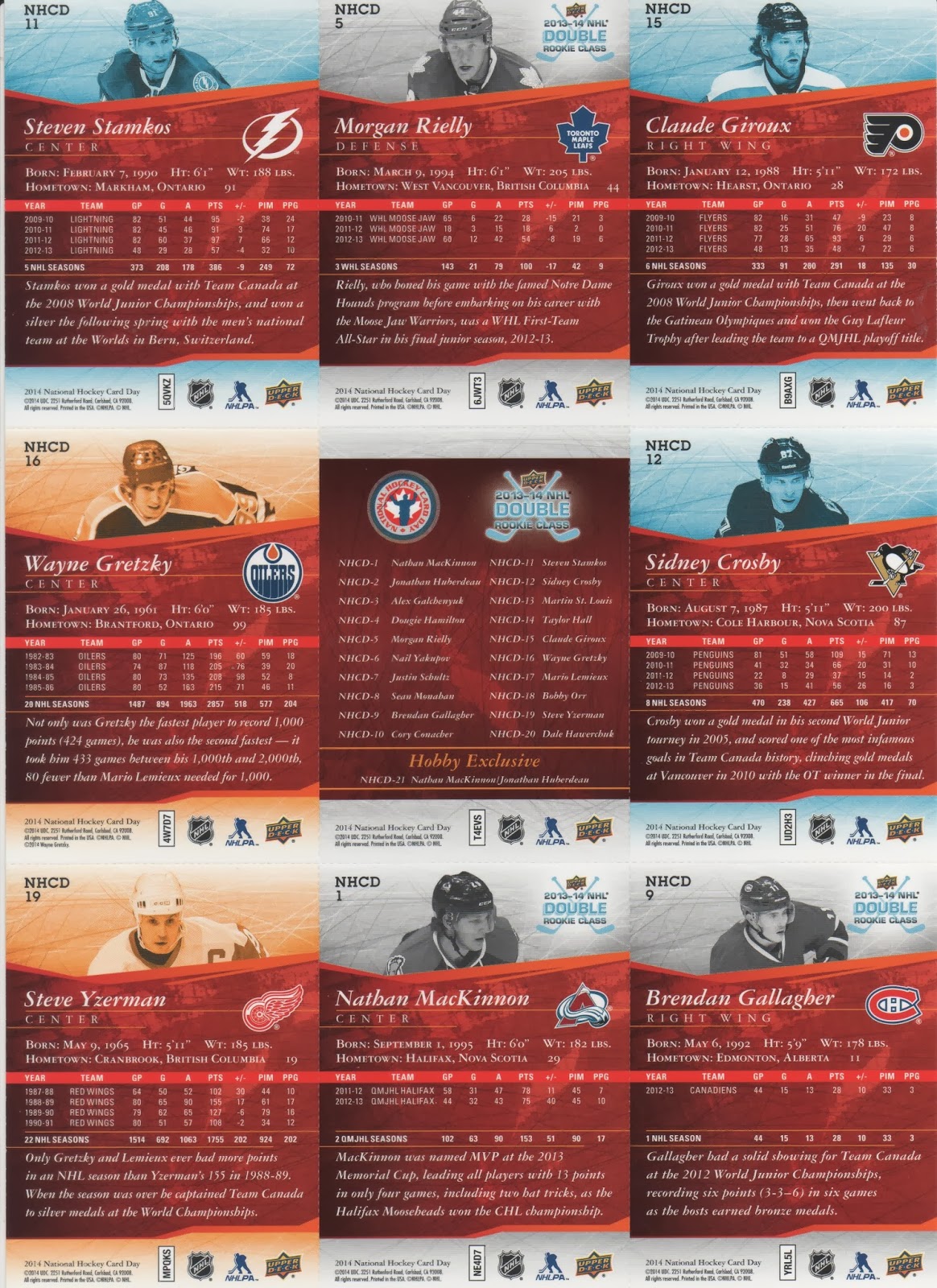 Sheet 4 front and back --and a Leafs

I'll take this collation every time. 4 Gretzkys 2 Orrs 2 Crosbys.I see on the bay there is one sheet for sale with a BIN of $9.99. Hooray.
I keep my record intact of one set from each of the six years the promotion has run.

Posted by hockey kazi at 9:31 PM No comments:

This Saturday is Hockey Day in Canada.


The theme of this year’s Scotiabank Hockey Day in Canada broadcast is ‘Community’ and will include features that examine the common bond Canadians share through hockey and the local rinks in which it is played as well as the role the game plays in bringing Canadian communities together from coast-to-coast-to-coast. Throughout the broadcast CBC will look in on hockey-related events taking place in community ies across the country including Prince George, BC, Barry’s Bay, ON and Sydney, NS. CBC has four games on tap for us. In the afternoon, we start with Rangers-Senators and Oilers-Jets. Later, we have Canadiens-Leafs and Flames-Canucks.
Upper Deck has returned with their National Hockey Card Day promotion. You can read about it here.
Closer to home, Legends Taphouse and Grill is hosting Hockey Day in Brant. The big prize will be a limousine ride to the Canadiens-Leafs game right after the draw at 5:00 PM. Former NHL'er Shayne Corson and another unnamed player will be on hand to draw the winning ticket and sign autographs.
I'll be busy on Saturday as I also have another commitment. No rest for the wicked.
Also, last Sunday I went to an art exhibit for one of my friends. He did a unique piece for my birthday two years ago. I wrote about it here . We have also bought a couple of other pieces.
He will be having another showing on Sunday Jan. 26th 1-3pm..Same place (Vintage Conservatory Wine Bar100 Lombard St Toronto. His work will be up until the end of January.

Space Clowns
(18"x36") acrylic paint,vintage wallpaper,Pencil crayon and ink.
Couple of examples of his work.
Yes, I do have other interest besides hockey. But they all are secondary.
Posted by hockey kazi at 9:46 PM No comments:

I got the eye of the tiger, the fire
Dancing through the fire
'Cause I am a champion, and you're gonna hear me roar

I got this e-mail last Friday.

Give me a call.. My wife cleaned out the numbers on the phone.. I have tickets to a alumni game Saturday night with Tiger Williams attending..


I was at work so didn't see it for three hours. It was from one of my autograph hounding friends. I had tickets to this event in November and took him. Oh yes, I was interested to attend this event. 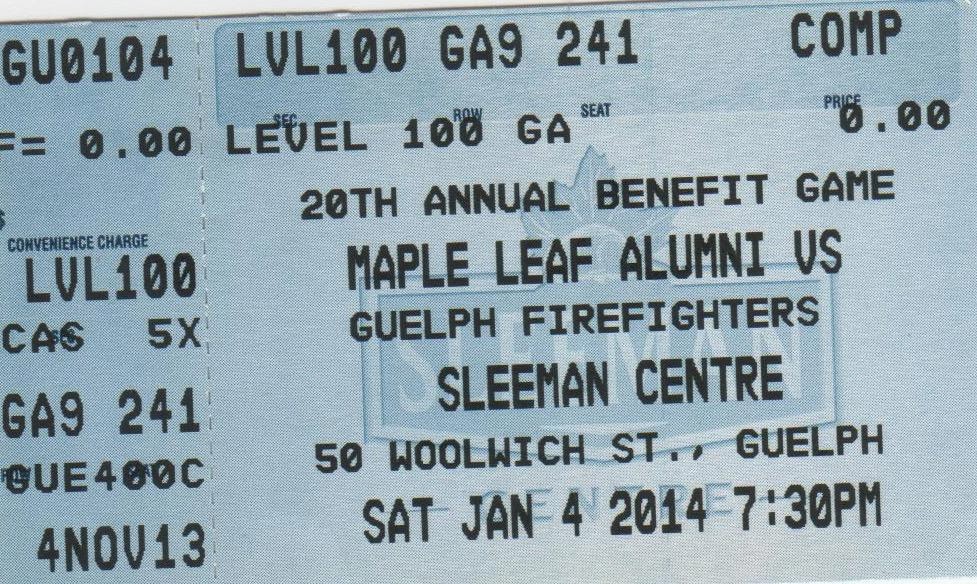 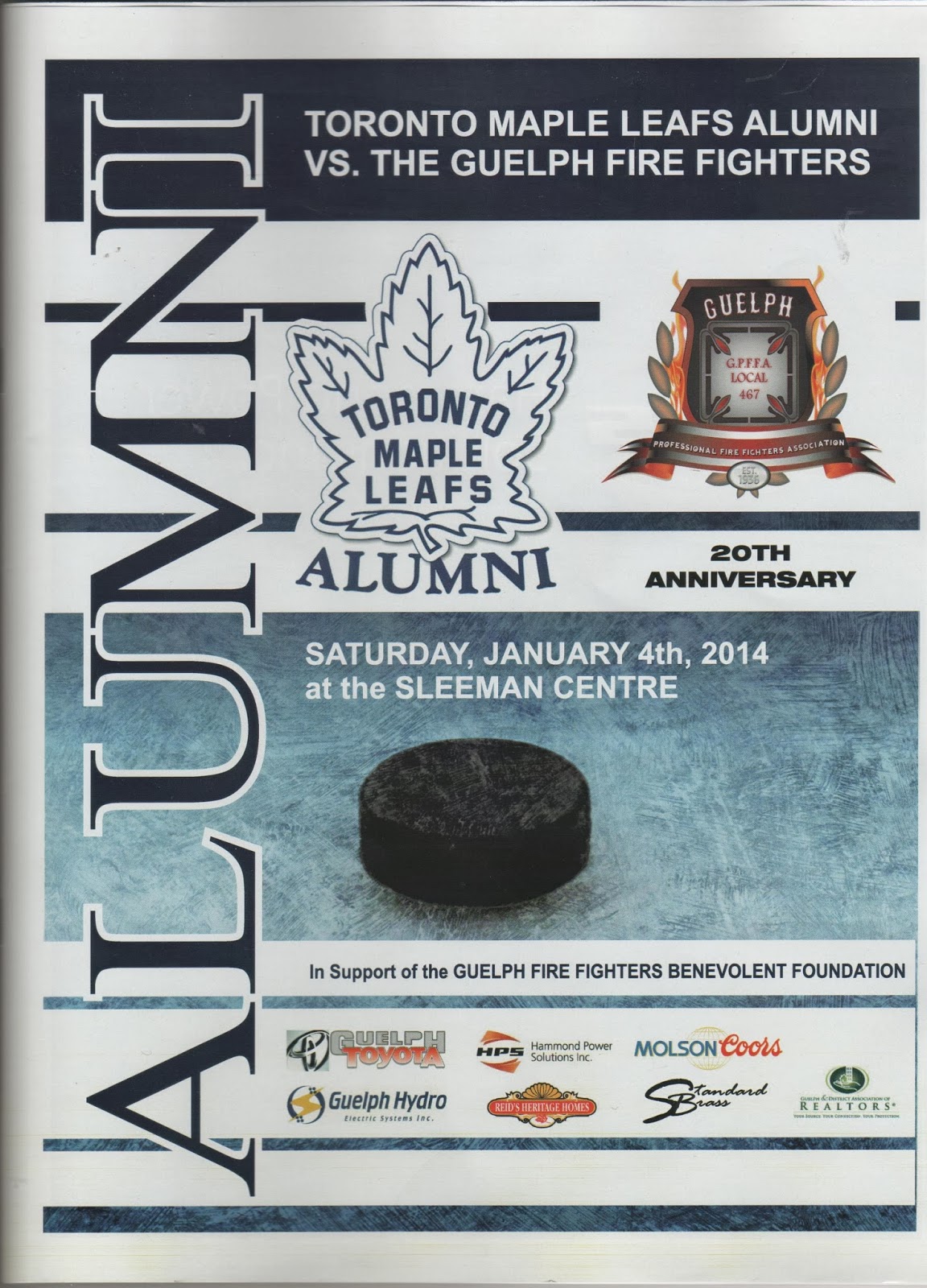 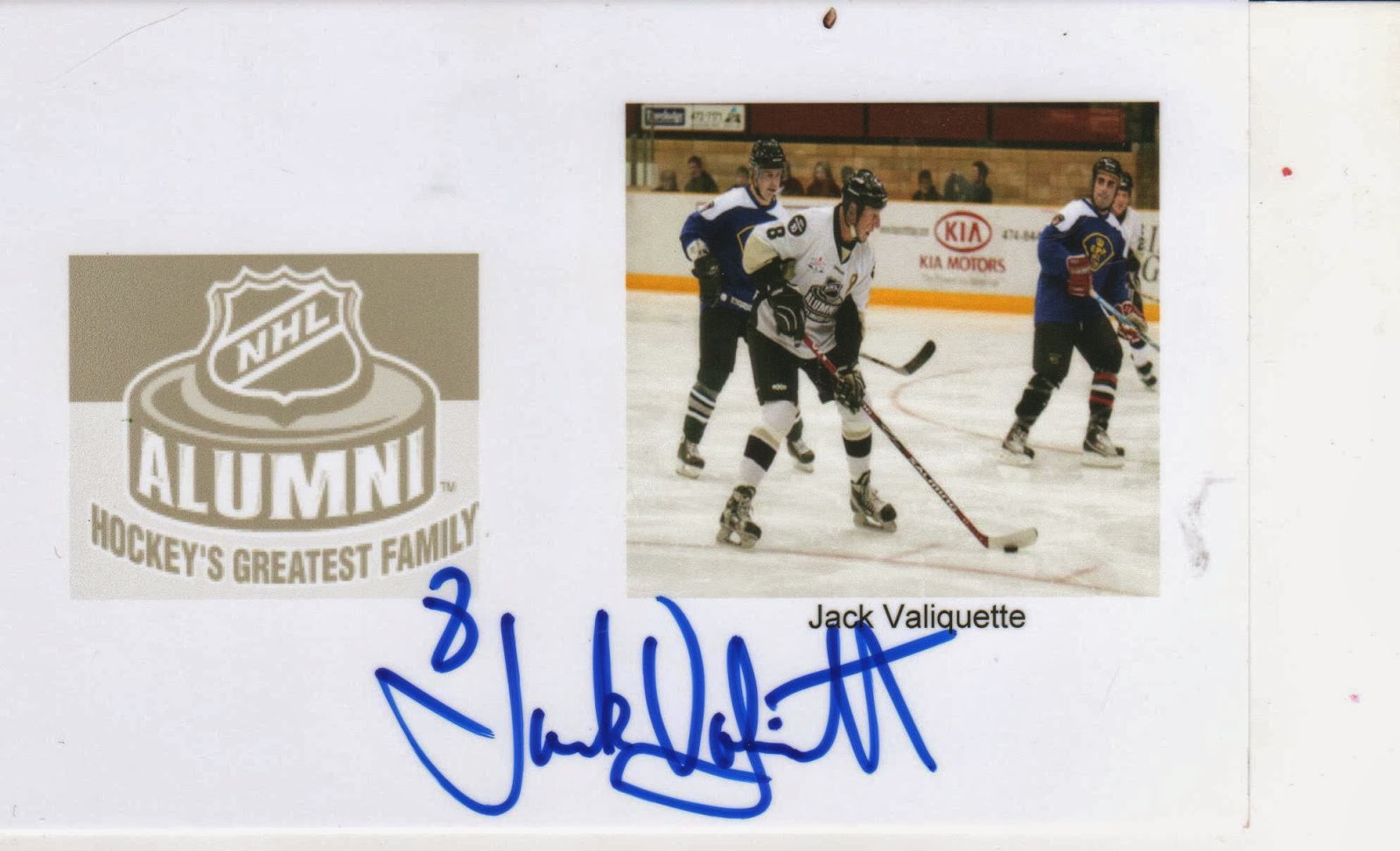 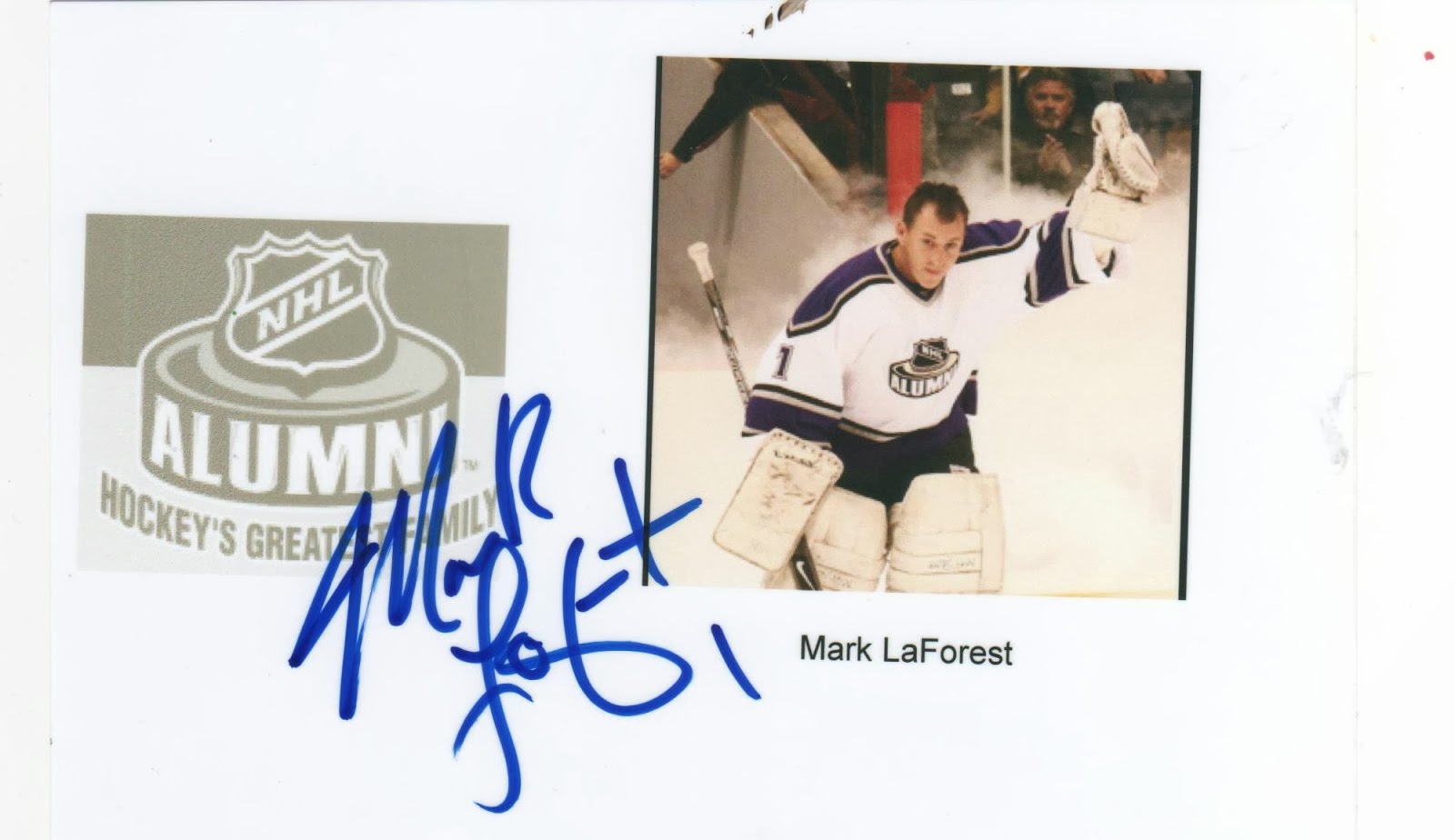 Al took a look at the picture and remarked that this was when he tore his ACL. 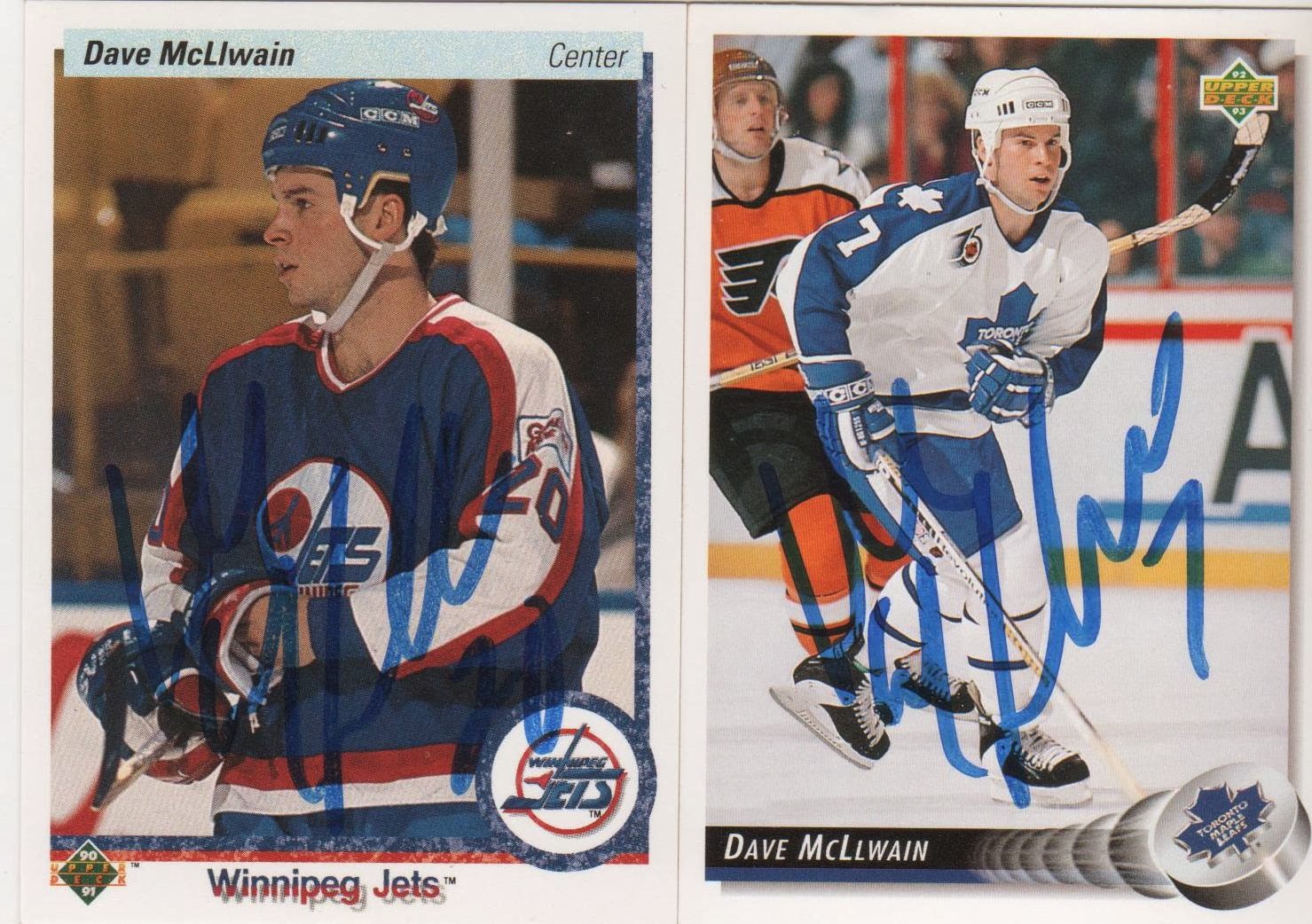 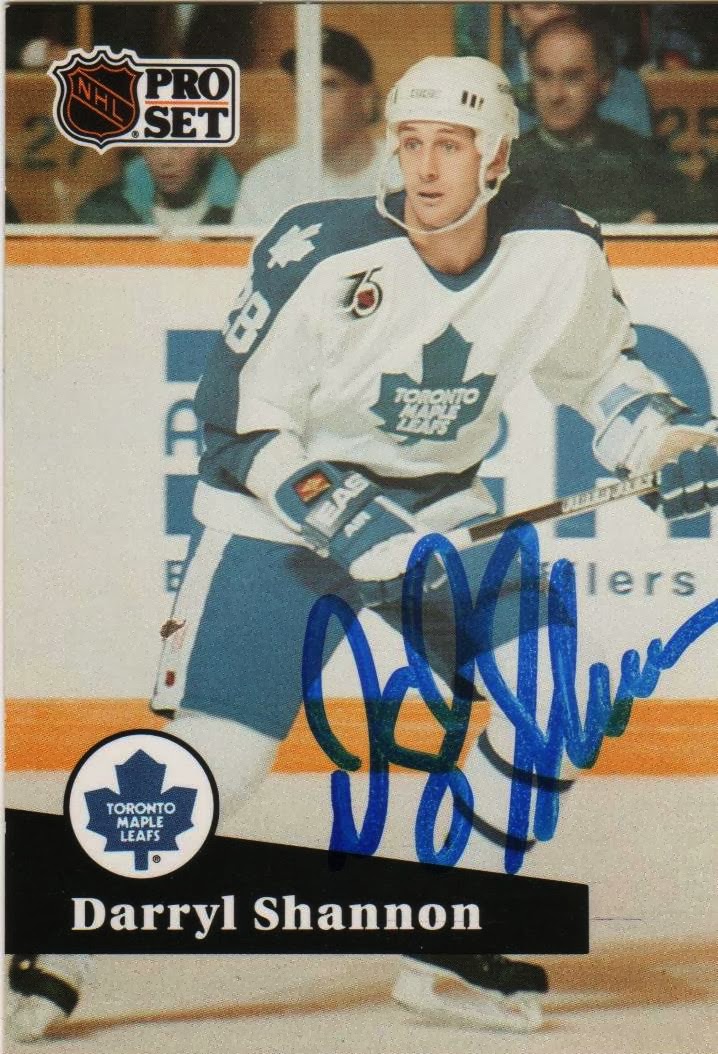 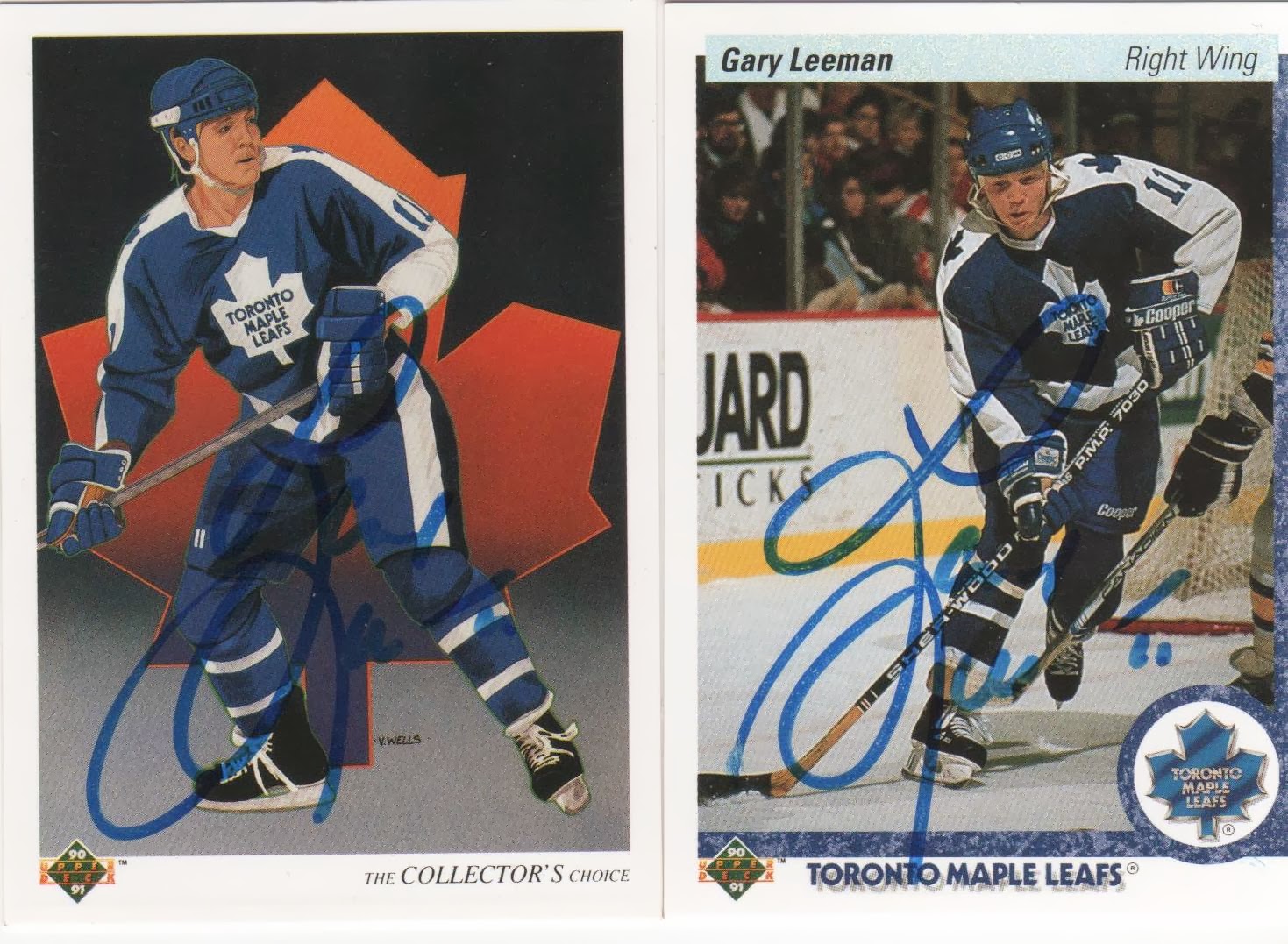 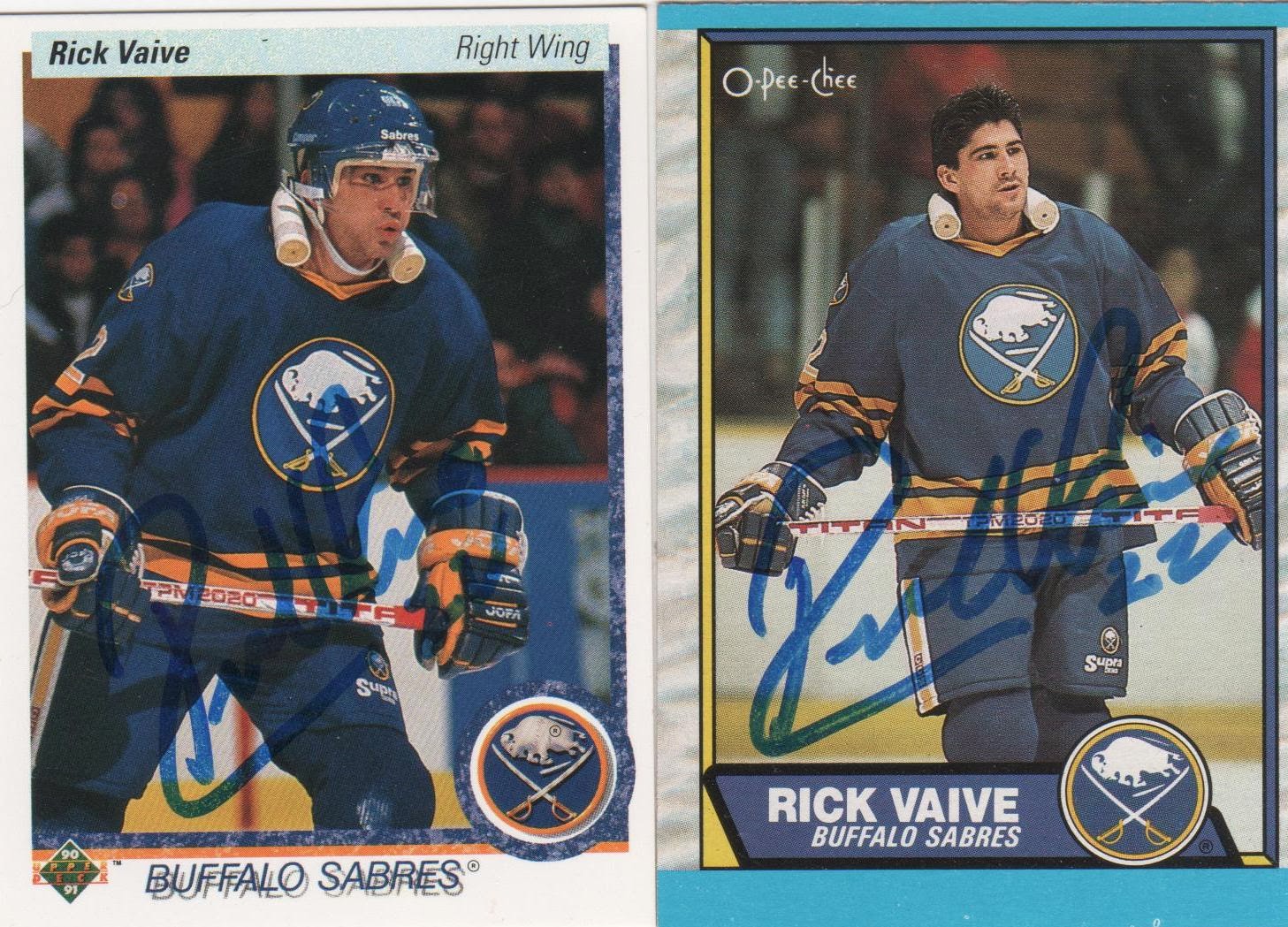 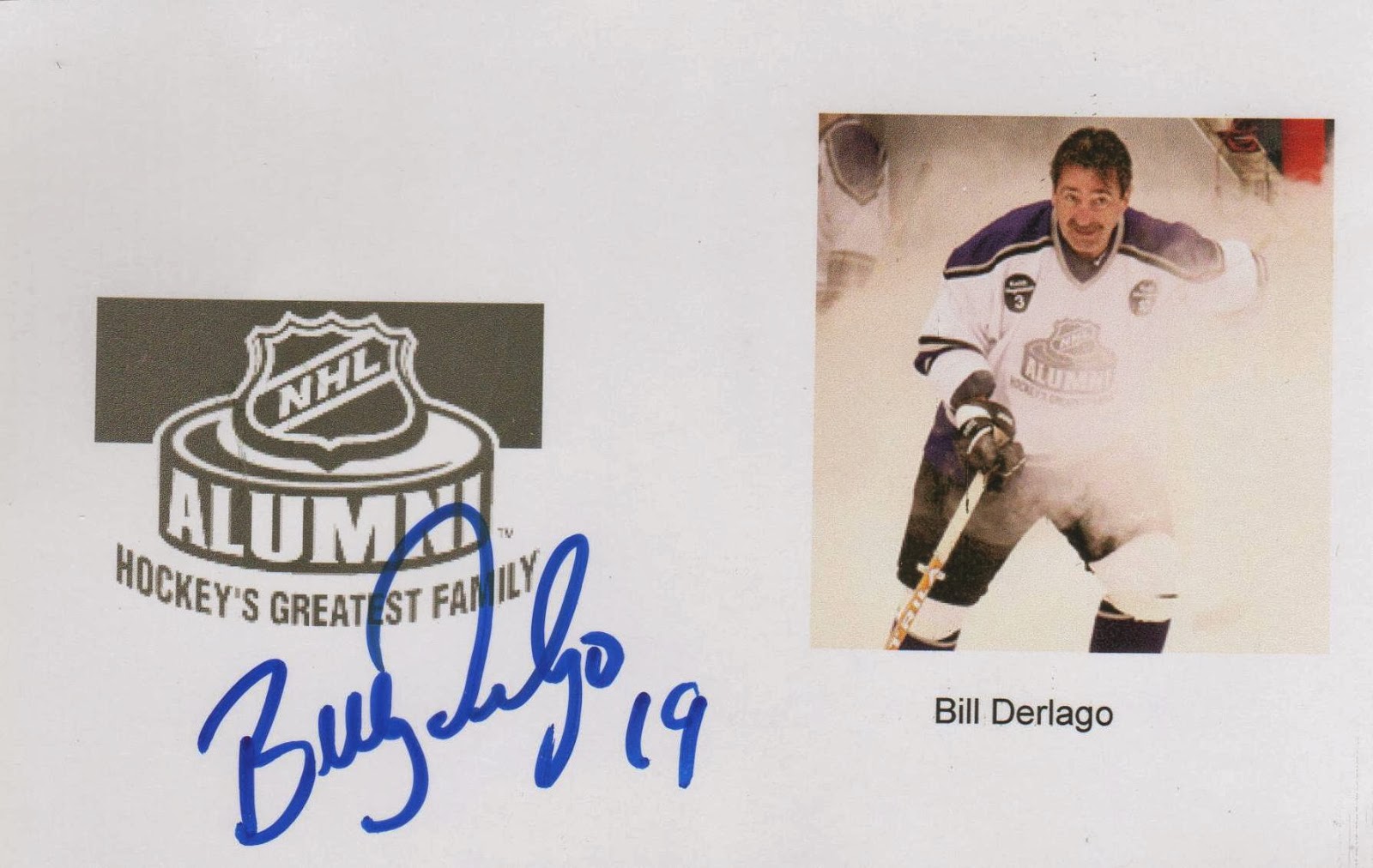 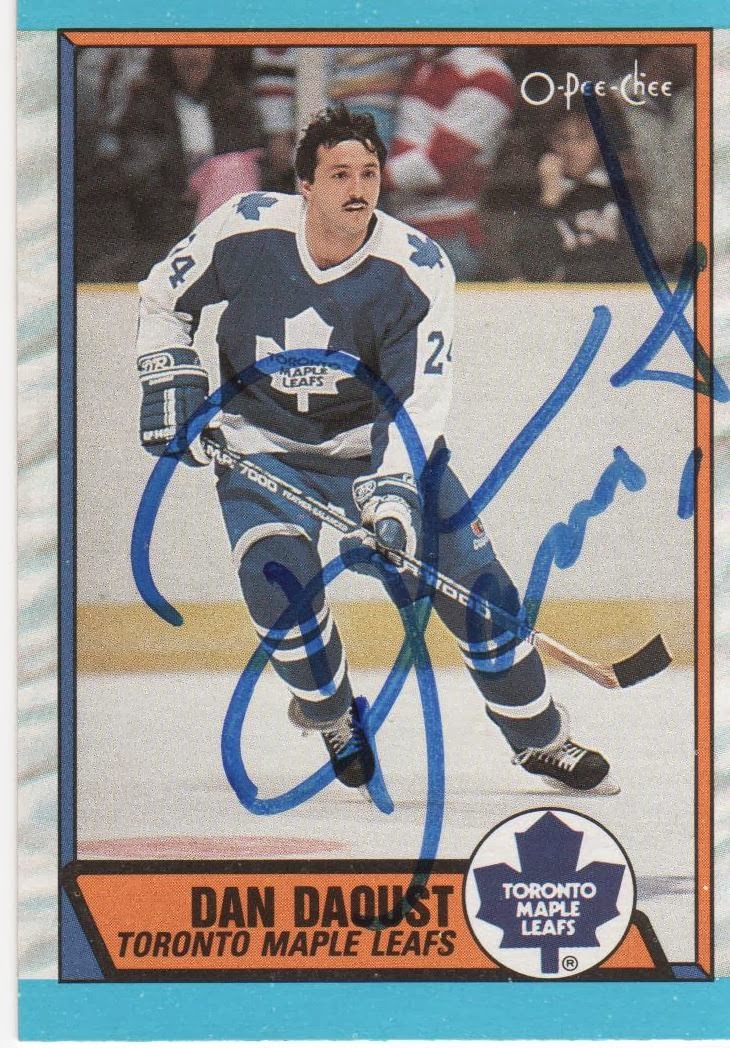 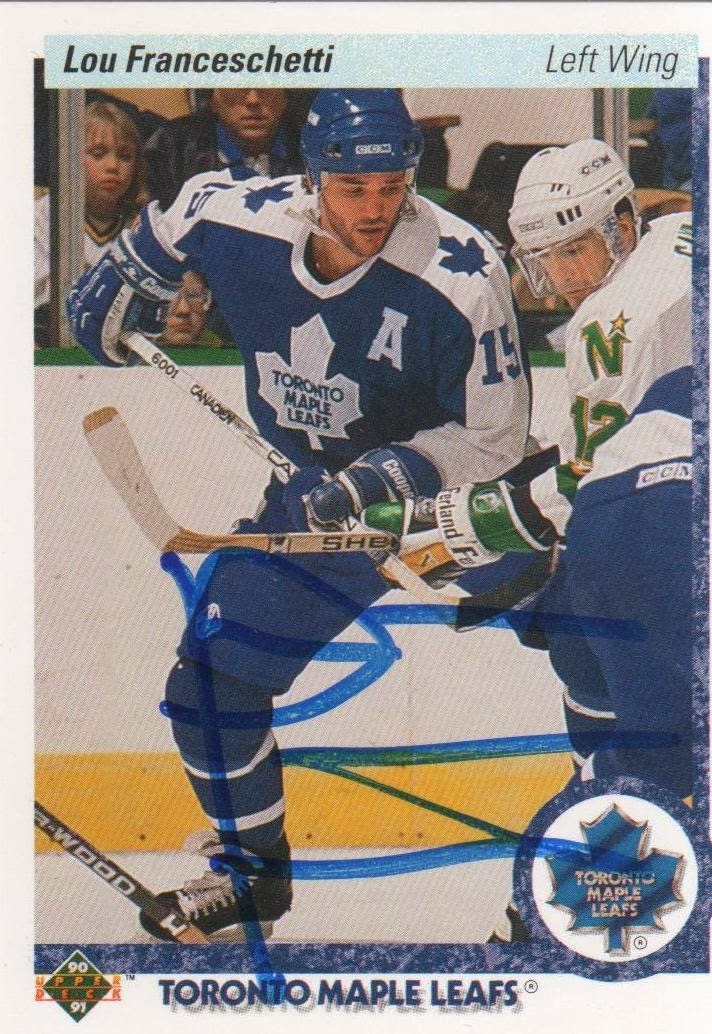 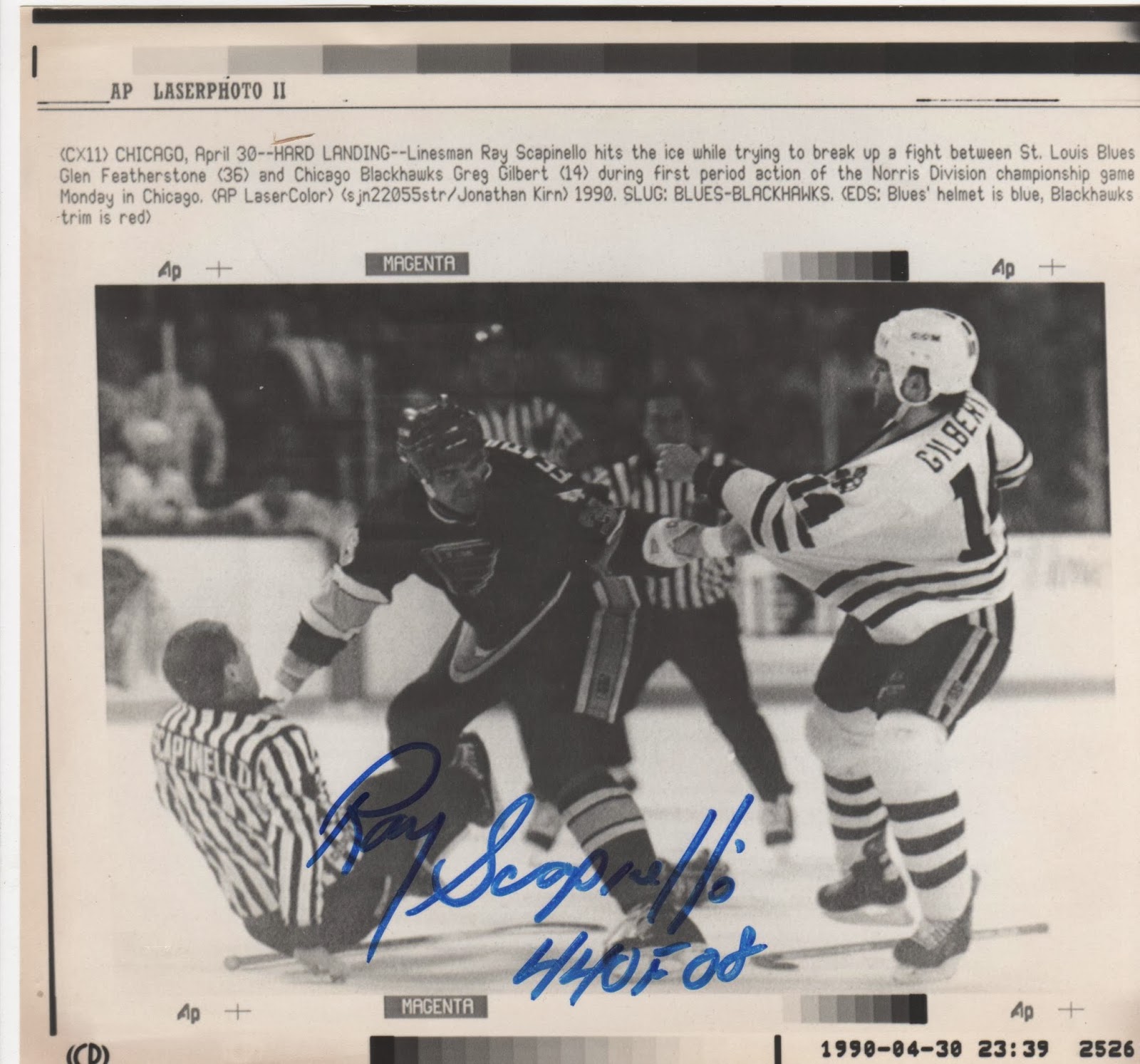 Ray said this was another time when he was thrown on his ass. He was with his wife and another couple. His wife remarked that this was when he had hair. I had an extra one of these and offered it to them . It was appreciated. 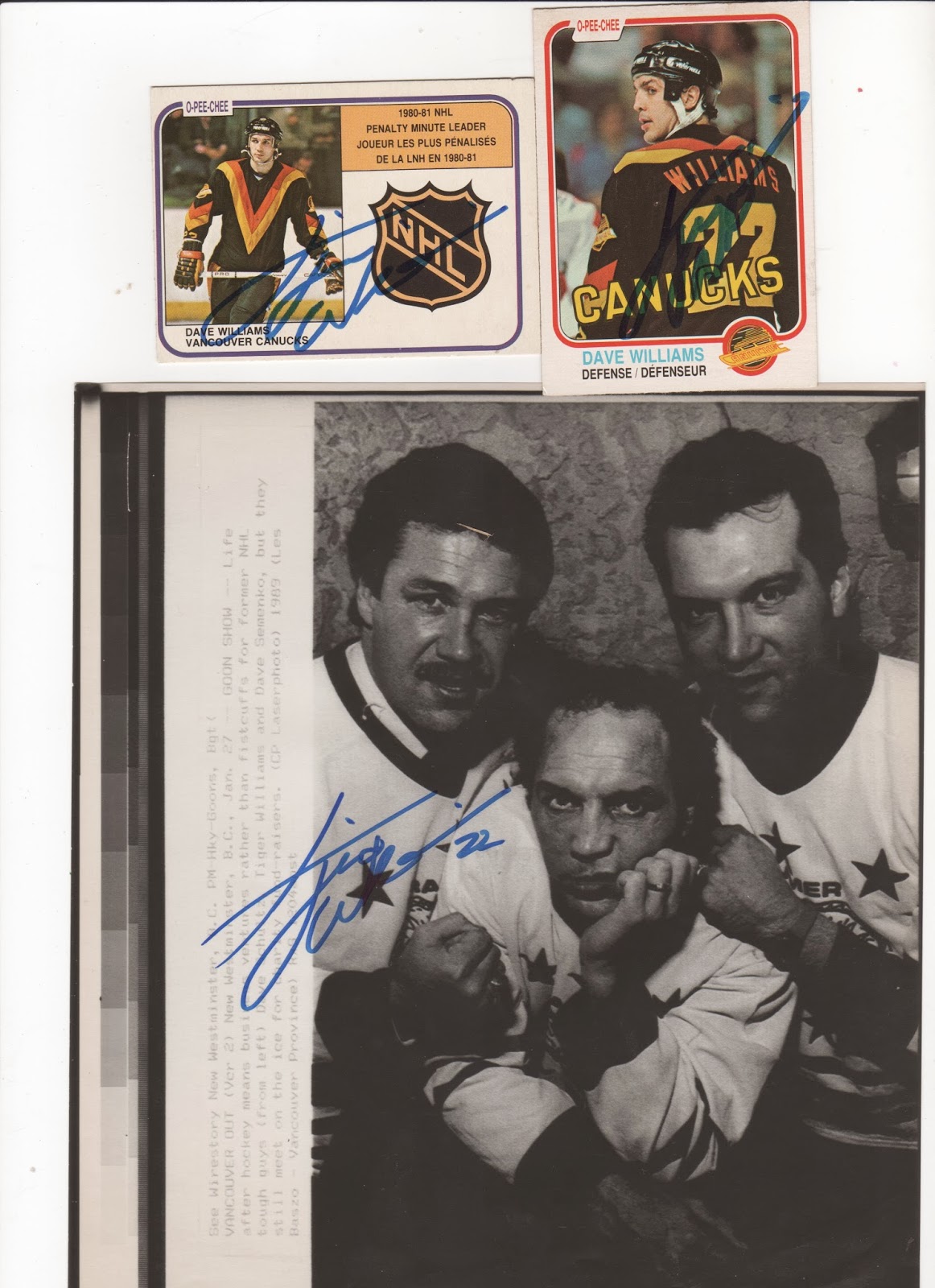 He didn't roar but sure enjoyed the picture. He asked Shanny if he recognized the other two cement heads.

Another good night. Good friends, good time and good autographs. It was a late night but I would do again.
﻿
Posted by hockey kazi at 11:50 PM No comments: