A few packages that came in last week. Been a while since I have received anything, so its Sharing Time. 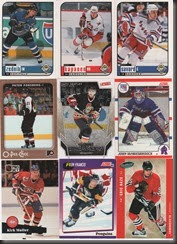 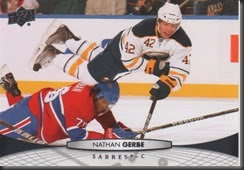 It’s been a while since I won and received a Listia auction. There’s not a lot with free shipping to Canada but this was a Canadian seller so the above 10 cards were had for 73 credits. 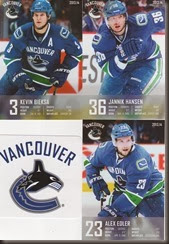 Sent and e-mail to the Vancouver Canucks for a fan pack. Received the above postcards and sticker in 11 days. I guess doing it during the Olympic break must have hurried this along. 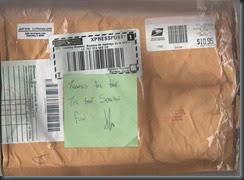 Last but not least.

This bulging brown (manila) envelope from Jeff at 2 x 3 Heroes. He had a Tis the Season post(referred to in the post it note on the envelope). He had a lot of extra cards and you could write in your team with two alternates. He also has the PWE club that I;m a member of. Check out his site for details. Anyhow here is what I received.

Five bulging team bags full of goodness. Two from my team, the Blue Jays. Got some coloured parallels , minis and inserts. I didn’t collect all these products when released so I got a healthy does of cards for my baseball collection. Two bags of Rays and one Brewers. There’s between 30-40 cards in each. Thanks again Jeff for your dump. 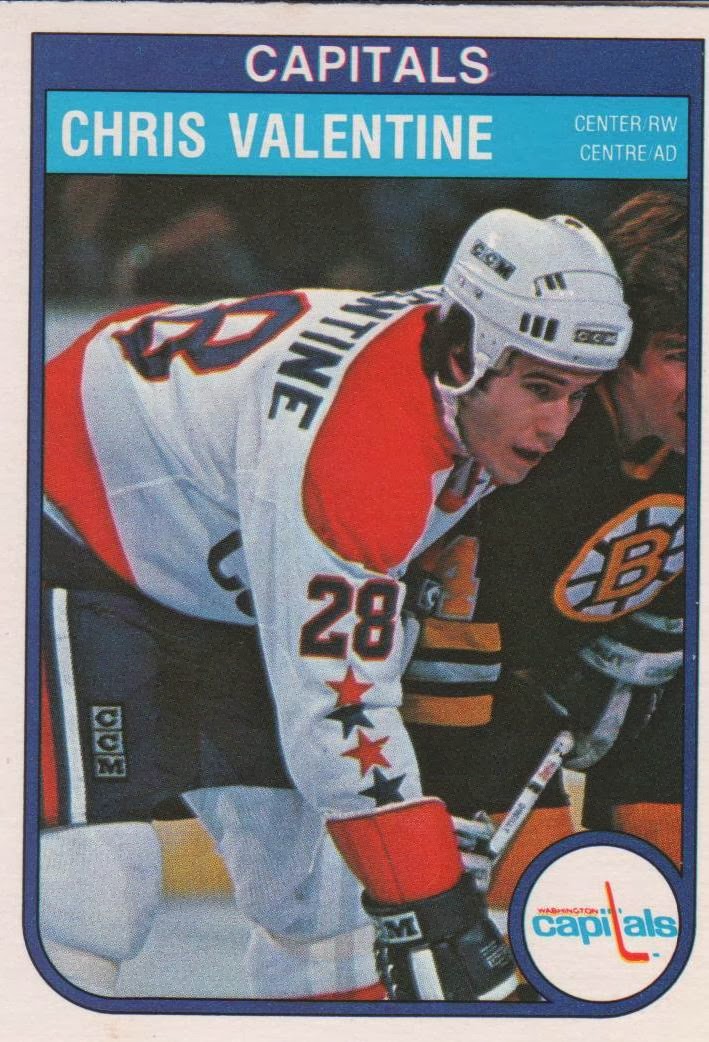 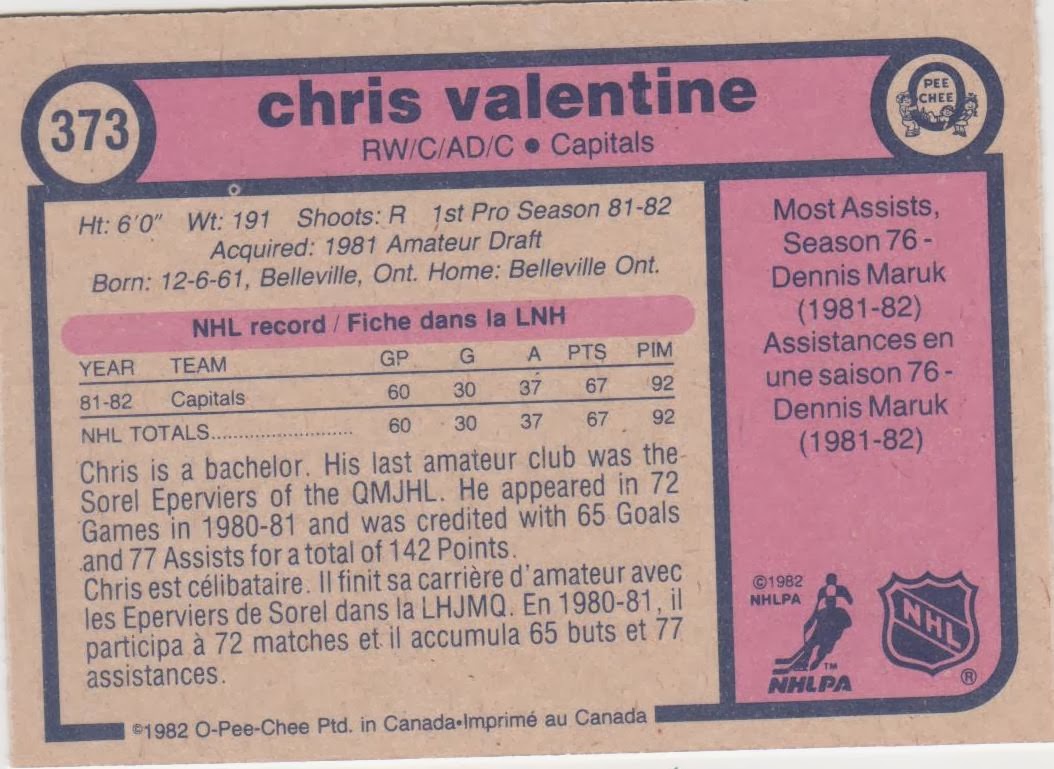 Center Chris Valentine was a very productive NHL player, but he will best be remembered for
his time in the German Elite League.
Valentine earned a reputation as a skilled offensive player when he scored 128 and then 142
points in his two seasons in the Quebec Major Junior Hockey League. Despite his incredible production, he was a 10th round pick.
After producong at more  than a point a game pace in the minors in 81/82, the Capitals called up their young prospect.
Valentine did not miss a beat pumping in 30 goals and 67 points in his first 60 NHL games.
Despite missing 20 games while playing in the minors, Valentine finished tied for fourth in team scoring as a rookie. Despite his first year success and producing 17 goals in 23 games in year two, he played 51 games in the minors. The next year he got into 22 games but scored only 11 points.
In the 84/85 season he signed with Dusseldorfer EG. This began a highly successful and rewarding stage of his professional career. Valentine provided major production for the club, leading the league in scoring seven times during his 12 years in Germany. He also led the club in scoring routinely and led them to four straight championships starting in 1990. He added a 5th title to his resume in 1996. After scoring 903 points in 525 games for Dusseldorfer, he retired as a champiuon in 1996. They subsequently retired his #10 in his honour.

I don't have his autograph (yet) so I'll be sending this out shortly.

Posted by hockey kazi at 4:27 PM No comments:

Today marks the 50th anniversary of The Beatles first live appearance on North American television on The Ed Sullivan Show.  I, along with 73 million, had been waiting for this moment. In the pre-internet days, news traveled a lot slower. We had heard of the group, their songs and their story. But now, to see them "live", was the ultimate. I was twelve years old at the time. To paraphrase a bit " When I was a child, I spake as a child, I understood as a child, I thought as a child,but when I became a teen, I put away childish things. This was the start of my exodus from card collecting. I remember starting to buy 60/61 Topps hockey and baseball when they were issued. It became a yearly ritual with my brother and friends all involved in flipsies, bike wheel spokes and got-em, got-em, need'em. But now, my tastes were changing along with my buying habits. I, along with my sister, would buy 16 and Tiger Beat magazine to keep up with the musically changing world. It was also time to save money for the next important phase in my life. Sports was gone and being replaced by music. I must have had a mono track mind. I would need lessons and a guitar. I got all this at the Yamaha music centre. Now my teacher's name was Geoff Edmunds. He said his brother was some musician named Dave Edmunds.  As I said earlier, pre-internet days information was far and wide. At least at the centre, I could rent a guitar, learn, play and feel what it was like. What's not to like. Getting a job as a delivery boy for a drugstore helped my cash flow situation. After almost two years, my dream was accomplished. 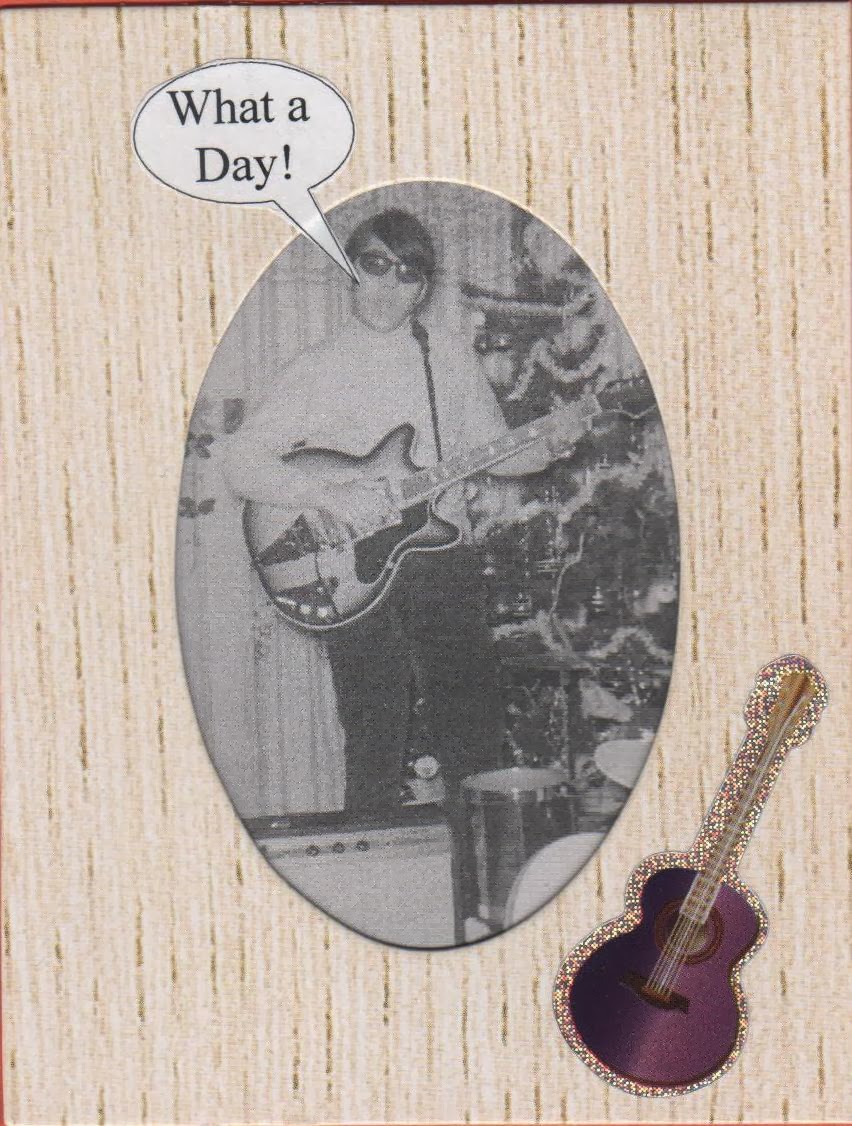 Rock n' roll heaven. (guess I thought this was a cool look)

Of course, I wasn't the only one affected this way. I could jam with some of my friends. Now THE DREAM was to be a rock star, not an NHL player.
Well, neither of those aspirations came true for me. And in 1980, I stared collecting sports cards and memorabilia again. Picking up memories of long ago plus stuff that was new to me. I'm still collecting and still rocking in the free world. 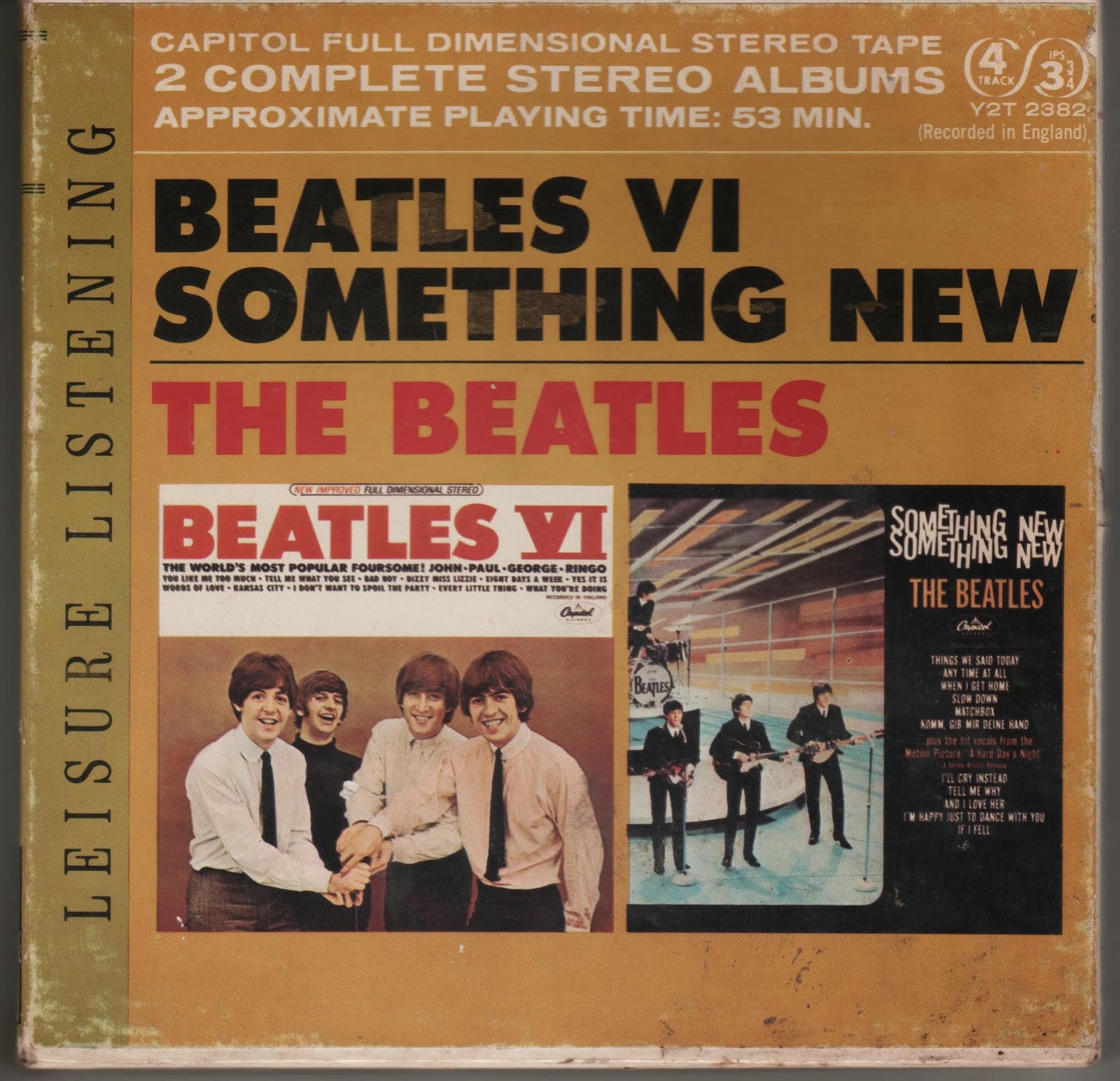 "Something" from the music collection. (see how I worked that in) 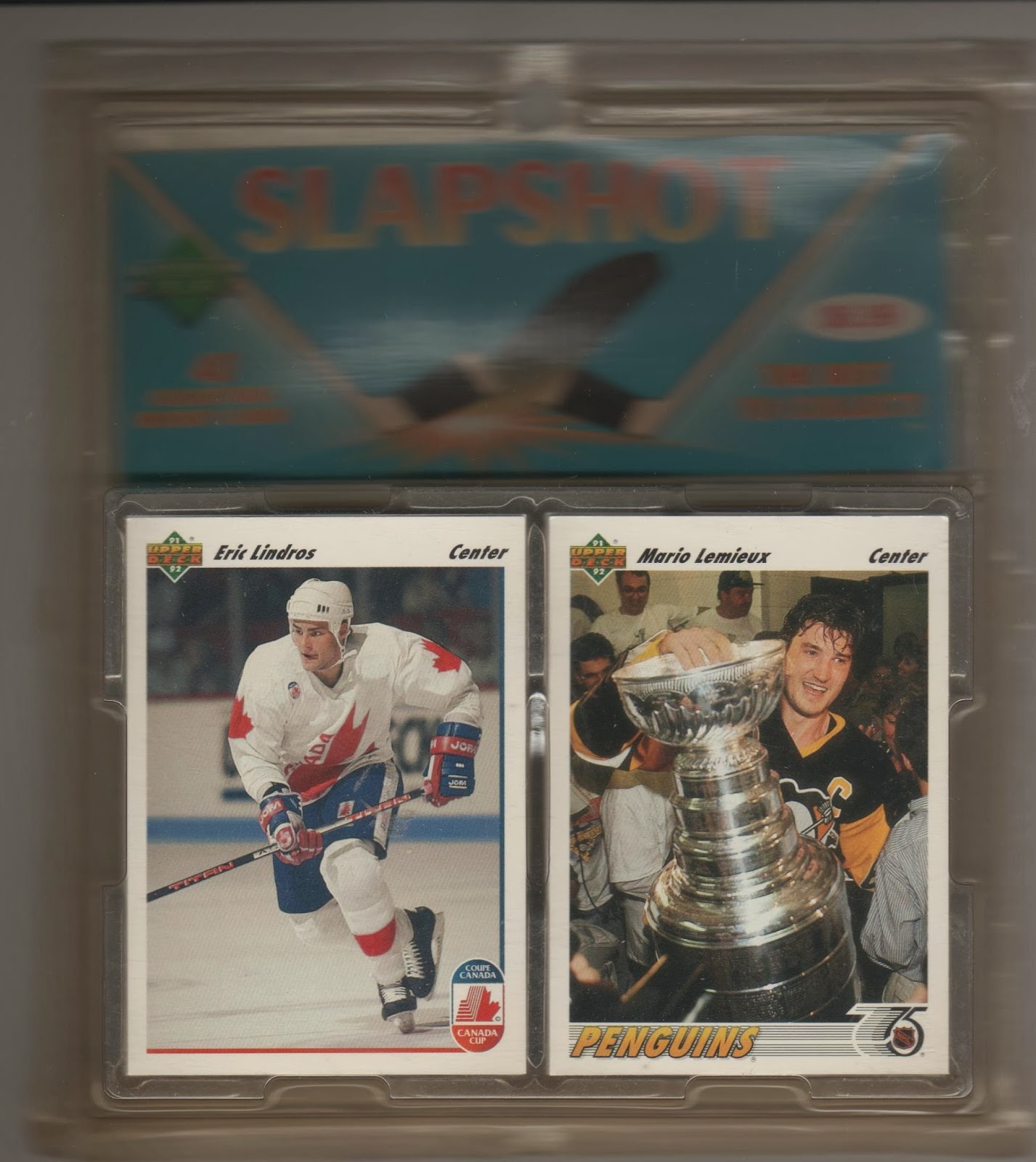 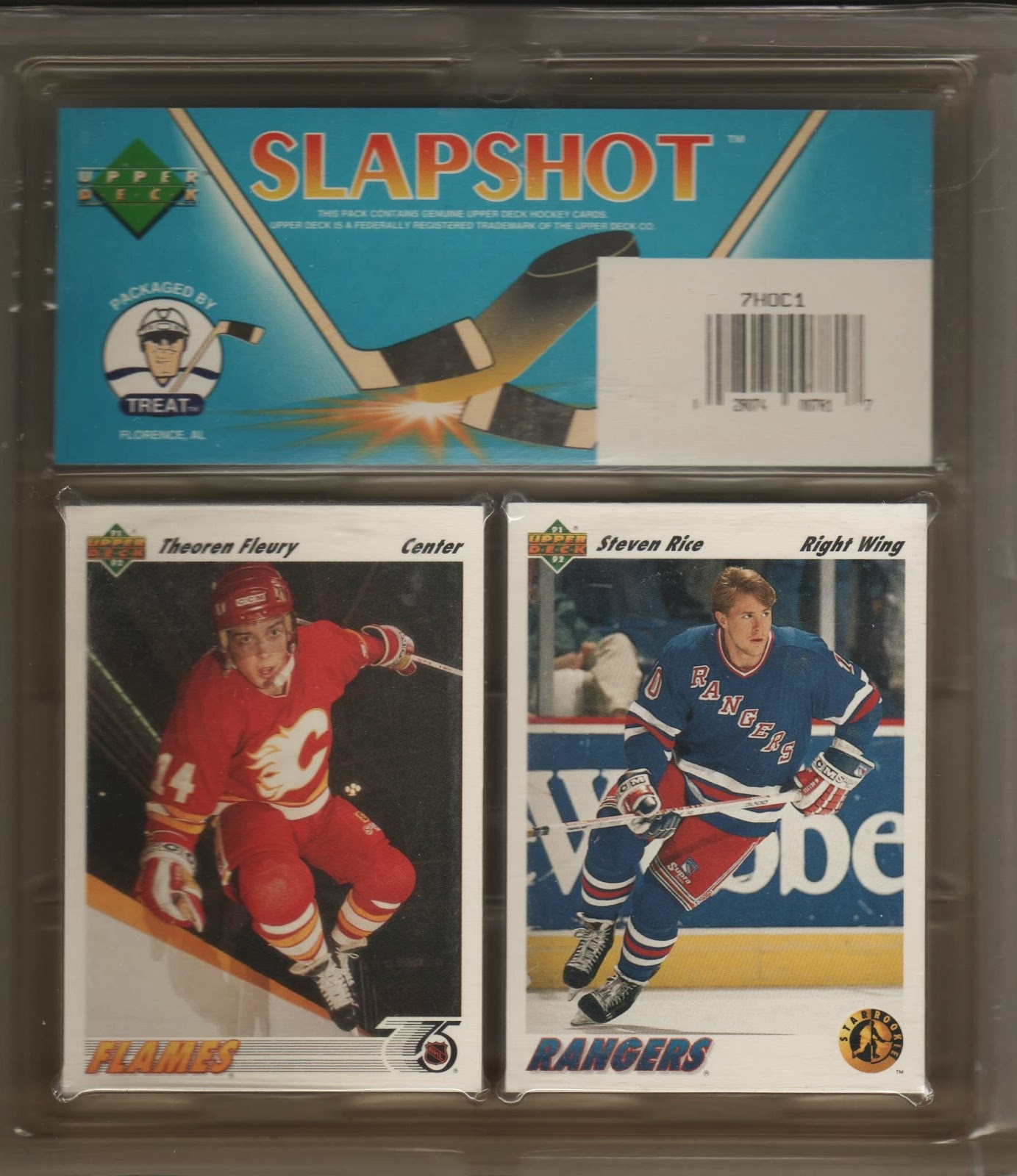 Treat Entertainment Inc is no longer in business. I seem to remember then putting out repacks during the height of the card explosion in the 90's. And I'm glad to get genuine cards. Wouldn't want any counterfeit Lindros cards.  It's a little fuzzy but the price tag was $6.99. Now I'm a cheap thrifty shopper so I know I didn't pay full price. As near as I can remember, I paid around $1.00. Time to crack this one out of it's shell. 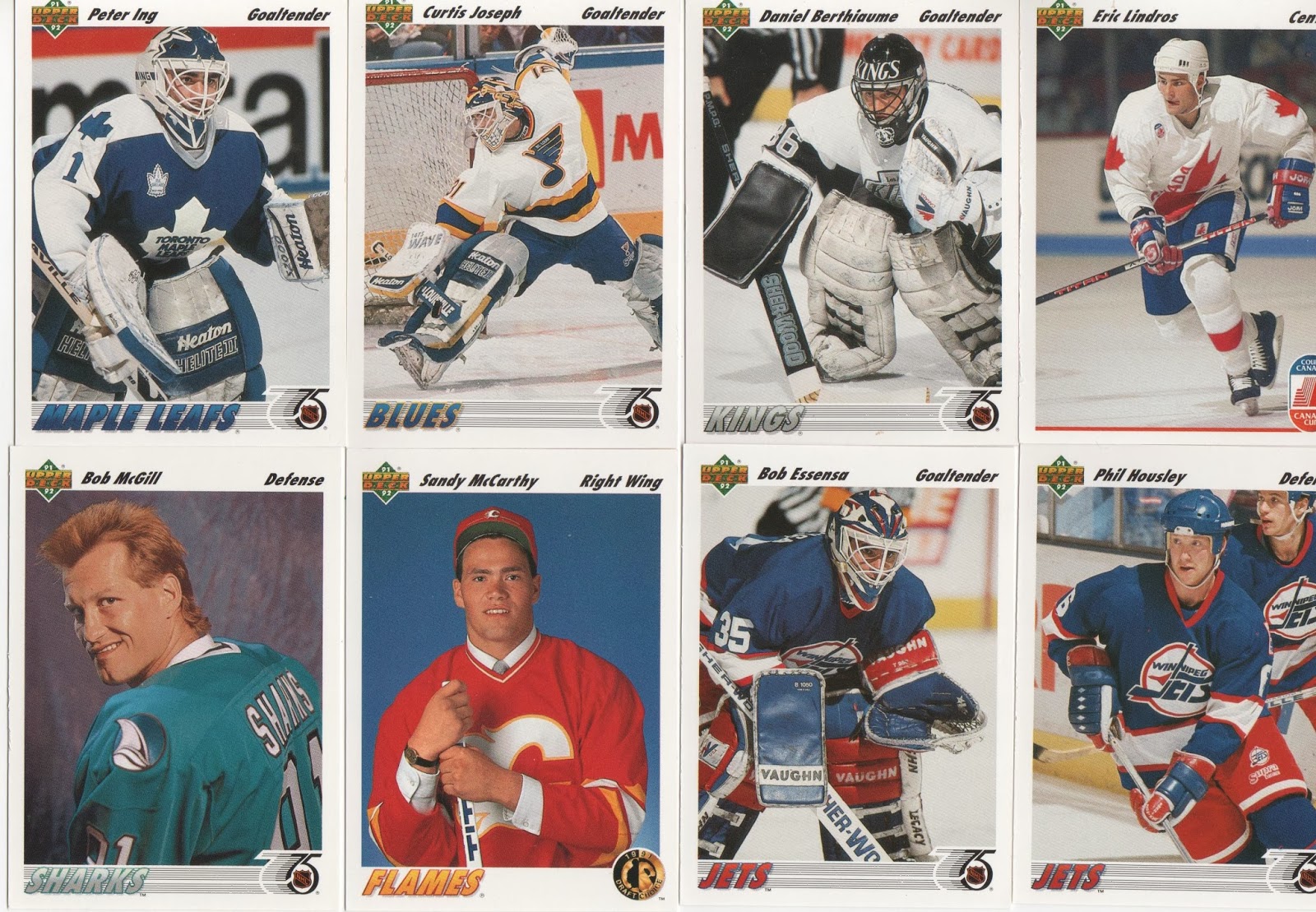 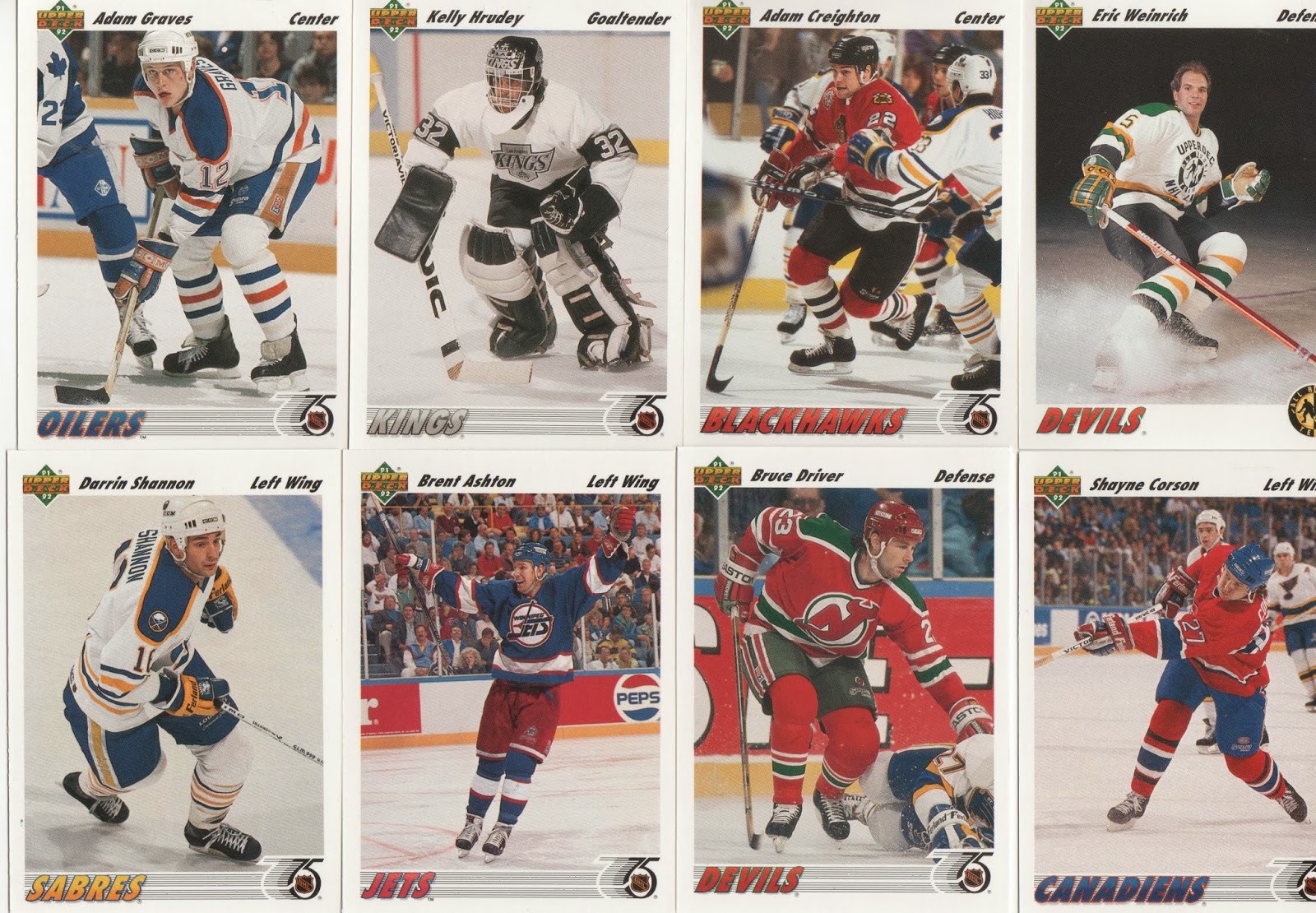 Here's the 20 cards from the left hand section. 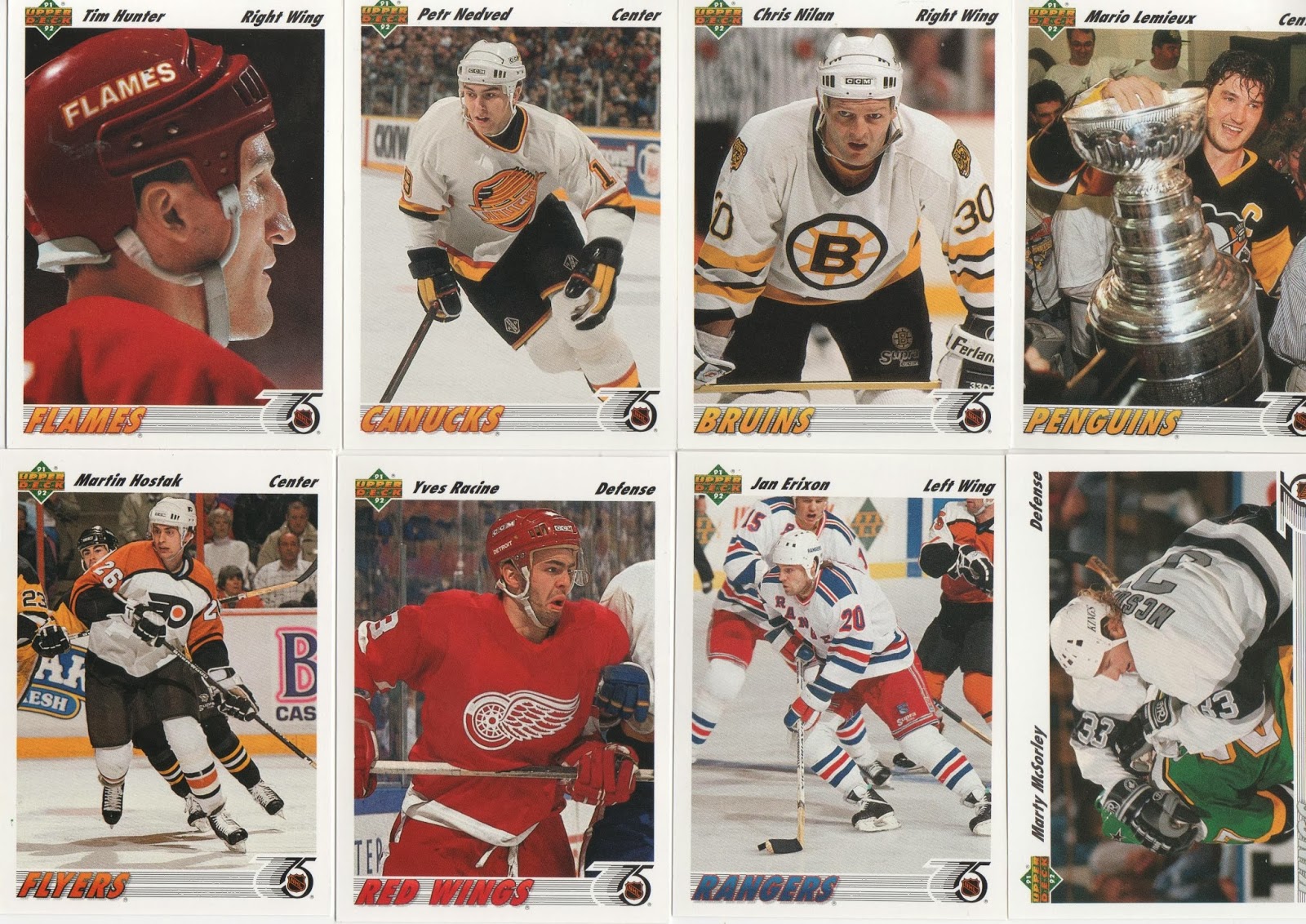 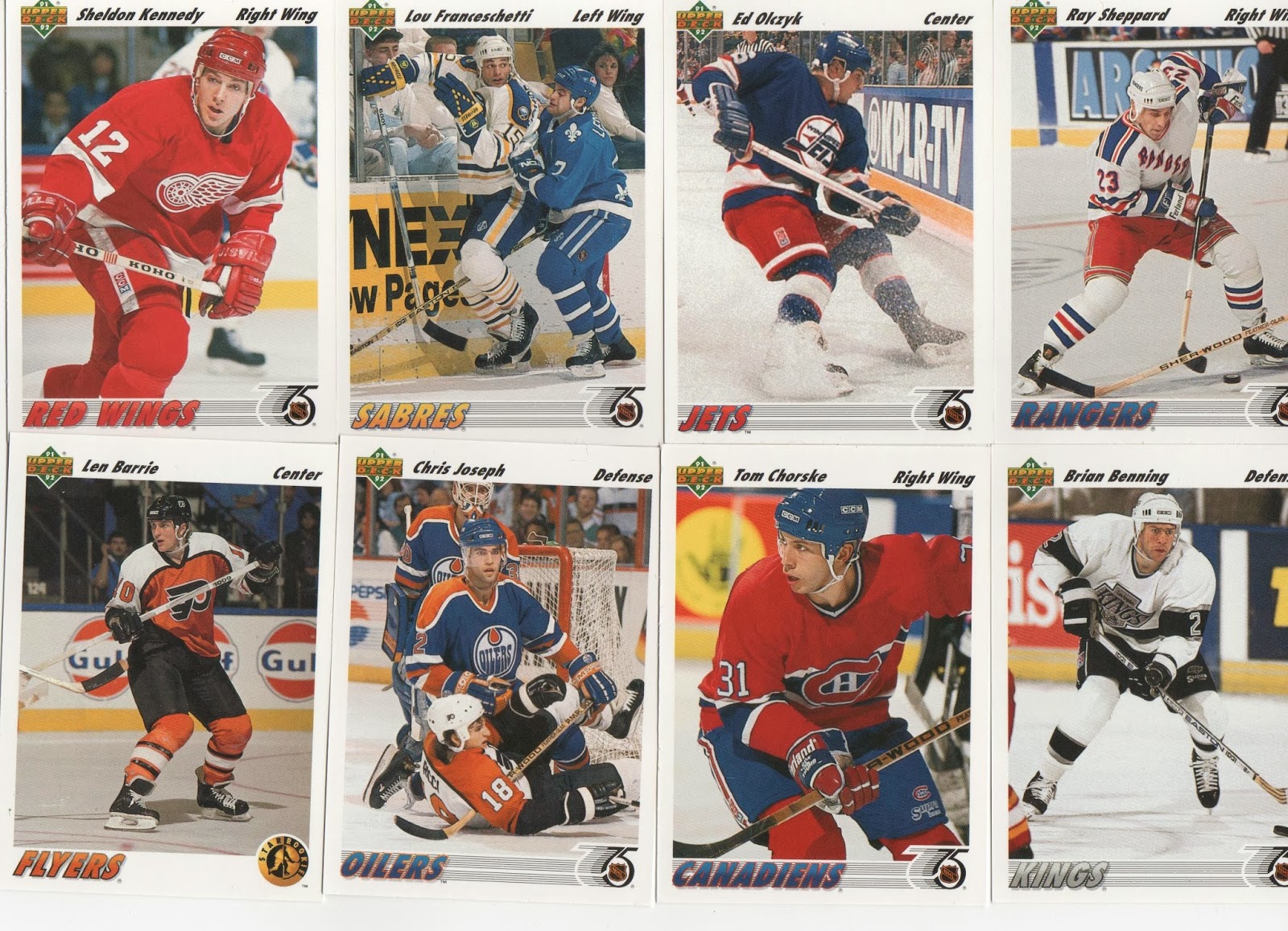 Here's the 20 cards from the right hand section.

Now I still have another unopened package

I'm assuming that the cards are  the same as the four cards shown are too.  Nice selection of stars, veterans and star rookies. The follow up set to Upper Deck's first hockey release. The design is very clean with a strong focus on photography. At the time, the glossy look was high-end, setting it above nearly every other hockey card set. The white borders and general layout are very similar to the 1990-91 set. The biggest difference is the NHL 75th anniversary logo along the bottom of the card. Card backs have another large photo, vitals, stats for the previous five years and career numbers.

However, not much of a treat. 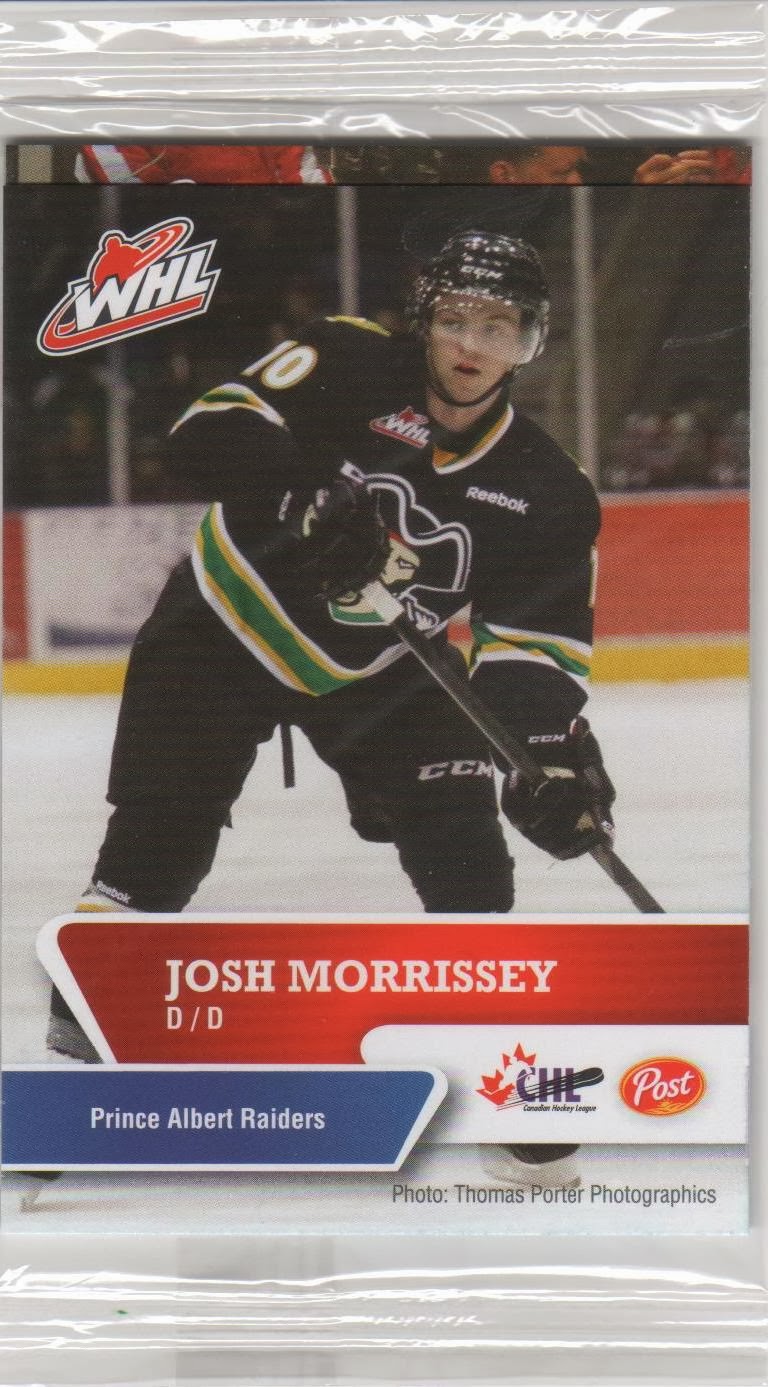 Now, if you've been following some of my previous posts, here is pack number four for me for this set. Only two more to go.

And that wraps up another post about nothing. Kind of like card collectors in cereal getting cards.