Jose can you see

Round 1 of Nachos Grande bracket challenge is now up and running. I'm up against some pretty stiff competition in The Card Hobbyist so I'll have to get the creative
"juices" flowing here.
If you were looking for another parody of the National Anthem, you won't find it here  You WILL read about a very pensive Jose Canseco regarding his past, present and future.
THE PAST 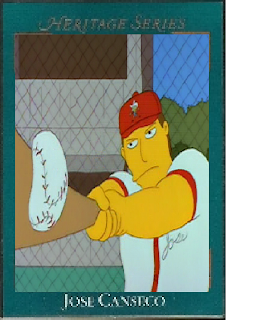 1992 Studio Heritage Series #BC4
The Springfield Nuclear Power plant Softball team
During a paid autograph session, Jose Canseco is approached by one  Mr. Waylon Smithers, who is recruiting ringers for the company softball team.
Canseco: I get $50,000 to play one game?
Smithers: That's right Mr. Canseco.
Canseco: Well, it's a pay cut, but what the hey. It sounds like fun.
At the time, Canseco was on a five-year, $23.5 million extension that yielded $4.7 million per season. (signed June 28, 1990)

Unfortunately, he never made it to the game.
Canseco got to play hero, rushing into a woman's burning house to rescue her baby, then cat, followed by a player piano, washer, dryer, couch and recliner combo, high chair, TV, rug, kitchen table and chairs, lamp, and grandfather clock.
No pay so I guess it's back to the A's and the on-deck circle.
(What The Rangers????)
THE PRESENT
(according to the card release date and for this contest's purpose) 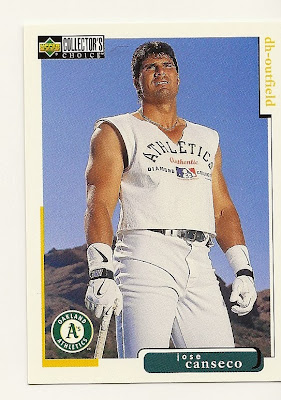 Featured Card
1998 Collectors Choice # 200
Oakland Athletics
Here we have Jose, having already re-visited his past, looking wistfully at his present.
"Well, that was a nice tour of Arlington and Boston."
During the 1997 season, his return to Oakland was largely unsuccessful and he's wondering which path to take.
(Do you know the way to Burlingame?)
"Seems like those guys McGwire and Sosa are trying to have some kind of contest and I'm not invited."
Now he's thinking that maybe he should have stuck to softball. 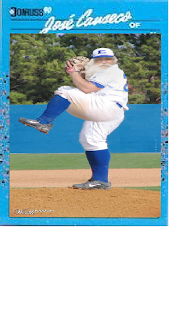 It's now come to this.
We have to read his tweets as they are pretty much made up of head shaking material.
Take this yard.
@JoseCanseco

Josh Burkett @jb0ne83
You're 49 RT @JoseCanseco: Just won the 50 and over senior softball tourney in ocala Florida we also beat the 1 ranked team in the nation


25 Comments (Feed for Comments)
I guess he should have stayed with his vision from the past. Now celebrating winning an over 50 softball tournament is worthy.
I was a professional athlete, the best baseball player in the world at one point
And which one was this?
The ghost of Canseco Past, Present or Future.
﻿
Posted by hockey kazi at 11:30 PM No comments:

And so it begins.  The gauntlet has been thrown. The first challenge is issued and now there is no turning back. I have accepted this challenge and will gladly go forward in this battle.

"Proud" to be a virgin

Do you remember Corrie Adamson? The Bachelor Season 14?
She found her Prince Charming, Chris Coghlan and married him in 2011.
Now that have your attention, let's get to the task at hand

The things you learn while doing research.  Googling Chris Coghlan to find out more about him and look at what we unearthed. Seems to be more interesting than his baseball career.

I guess I should get around to writing about this card. 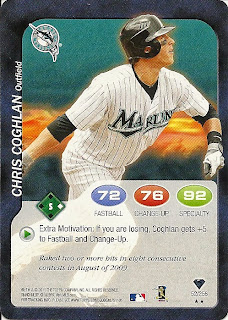 2009 National League Rookie of the Year

It appears this guy is a (swinging) singles hitter. That's the S in the green baseball diamond. But on the card, he looks like he's watching a long flyball.(or his career going going, its outta here)

And if we're losing, he gets motivated and increases his fastball and change rating by +5. Gee, I could get motivated for 503,500 reasons.

Chris has always re-signed one year contracts and could be the odd man out with the improvement of other outfielders in Miami.

He has Super 2 status and is arbitration eligible which means he will likely be back with the Marlins unless designated for assignment.

As the saying goes, if you don't have anything good to say....
Adios tarjeta de beisbol

More interesting stuff to read on the couple than on the main subject.

Corrie and Chris Coghlan . Navigating our way through life, marriage & baseball with Jesus Christ as our guide!

Maybe this should be the card I'm writing about

The preceding post is part of Nachos Grande contest.  Read about the details and


Vote for me here

Today I am going to resurrect one of my old post ideas.
This will consist of autographed cards from my collection of a NHL/WHA player who is celebrating a birthday today.
And the winner is


Sydney, Nova Scotia's Norm Ferguson was born on October 16, 1945 and he went on to a four-year career in the National Hockey League. A right winger, he spent two years with Montreal Junior Canadiens while being groomed by the NHL Canadiens, but he was traded to the Oakland Seals in May 1968.
The 1968-69 schedule marked the first year of Ferguson's NHL career, and he exploded onto the scene scoring 34 goals as a rookie. However, the next season his totals dropped to just eleven goals and 20 points. In the final two years of his NHL career, Ferguson bounced back a little, but was never able to come close to his rookie year success.
By 1972, despite being claimed by the New York Islanders in the NHL Expansion Draft, he was out of the NHL and pursuing a career with the upstart World Hockey Association. He played two seasons in the New York area with the Raiders, then took his skills to San Diego when the franchise relocated. He spent three seasons with the San Diego Mariners, scoring 36, 37, and 39 goals in successive years. When the Mariners franchise folded, Ferguson signed with the Edmonton Oilers.
With the WHA Oilers, Ferguson's point totals dropped from 71 the year before to just 47 with Edmonton. Following his only year in Edmonton, Ferguson retired from professional hockey. 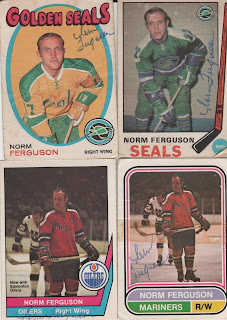 I received these blue ink signed cards TTM in the 80's.
Posted by hockey kazi at 8:44 PM No comments:

We interrupt the reguarly scheduled program

Monday, for Thanksgiving.
Yes, no work today with the added bonus of turkey, stuffing and all the other extras.
Thank you. 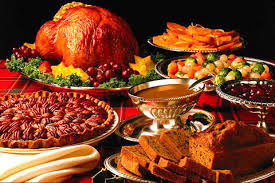 Which means a 4 day work week.
Thank you.

So lets also interrupt this hockey-centric blog with something different.
First up, a PWE from Jeff @  2x3 Heroes. I do collect baseball and mainly Blue Jays. Not as much as one of my friends, who is strictly a Blue Jay card collector. He has some great collection. These are all neatly in catalogued binders I'm in Jeff's Club PWE and this is the second one I have received. 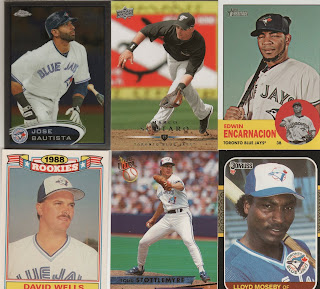 Thanks again, Jeff.
Next up, just like Doug @ Sportscards from the Dollar Store, I also check out the dollar stores offerings when I'm there. I had to pick up a few things for Thanksgiving and then checked out the inventory in the "card" department. The usual supplies and repacks were well represented. But this caught my eye. 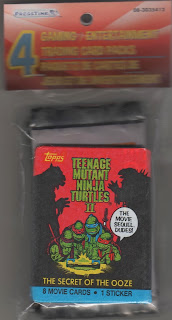 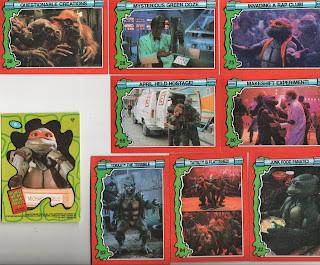 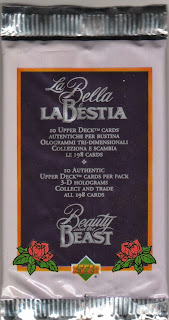 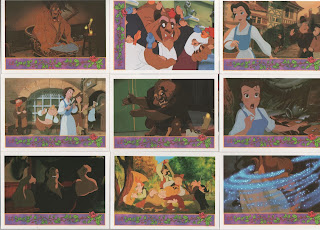 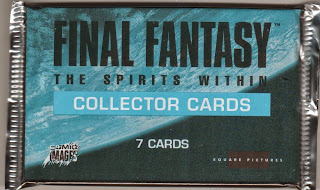 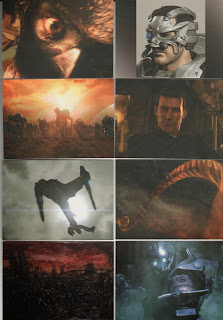 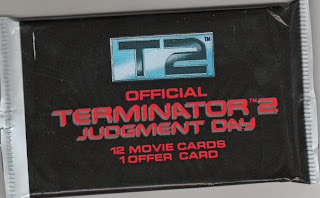 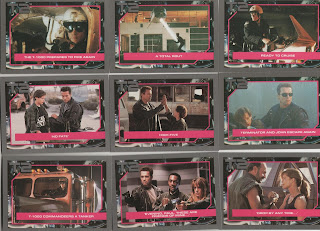 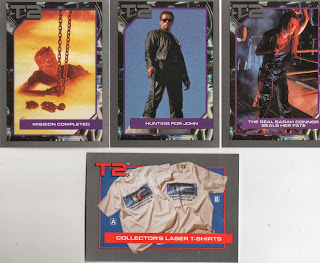 12 movie cards + 1 offer card (140 card set + 10 offer cards)
Thanks Dollarama for a few minutes of entertainment. Looking at the other packs, there are a few different ones that the ones I opened. Might go back and try some more of these.
Now time for some pumpkin pie.
﻿
Posted by hockey kazi at 11:08 PM 1 comment: