Under the Canada 150 banner, there are many events going on in Canada to celebrate Canada's sesquicentennial this year. Saturday July 22 had an event put on by the County of Brant, which included live music, children's activities and hockey with NHL Alumni. Unfortunately for me, my wife's nephew was getting married in Edmonton so I had to miss the event. Fortunately, fellow autograph collector Dennis, (pictured in linked story) was able to attend after I alerted him of the event. I was able to trade him of the posters from Hockey Night in Brantford 2017 (see previous post) for this item. 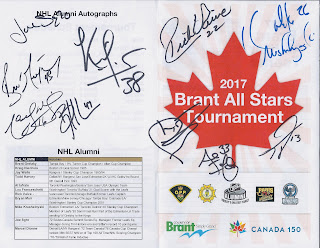 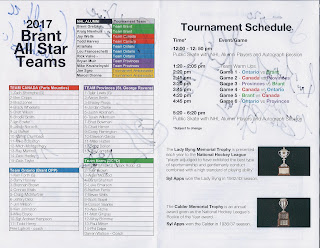 This autographed program by all NHL Alumni listed except for Jay Wells.

Thanks Dennis. That's one thing I enjoy about this hobby. Helping one another and having fun.
Posted by hockey kazi at 11:23 PM No comments:

The Final Period. No shoot-out. No overtime. After 6 years and raising over $500,000 for charity, the plug has been pulled.The powers that be have decided this event has run its course. This was one local event to help the community and allow me to add to my autograph collection. When the event started, there were more NHL alumni playing. Lately, there was more local talent playing at various levels participating. Politicians too. Anyhow, I digress. I'm going to document my experience from yesterday at The Wayne Gretzky Sports Centre. Strangely, enough, it was the 29th anniversary of The Trade. 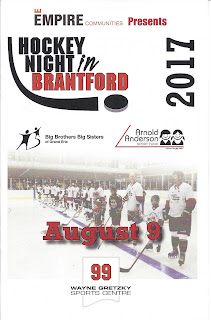 Program for the night with team rosters, bios and sponsors thanks. 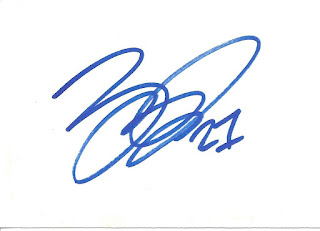 I've already got a few autographs from Zac so I got this index card signed. He was signing between periods. Some kids came to get his signature but had no writing instrument. Zac asked if he could use my Sharpie. No problem was the  reply. 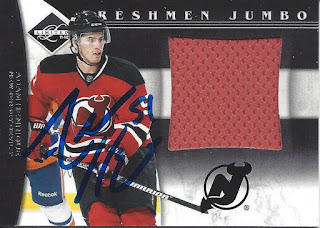 11/12 Panini Freshmen Jumbo #10. Adam was also signing between periods. He was kinf enough to ask if I wanted him to put the # 51 as depicted on the card. No problem was the reply. 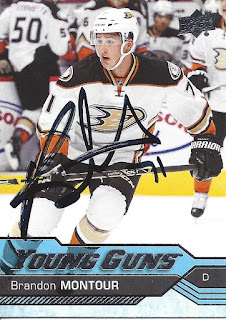 16/17 Upper Deck YG #476. Brandon was signing after the game and used his black Sharpie. No problem. 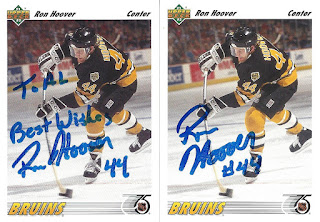 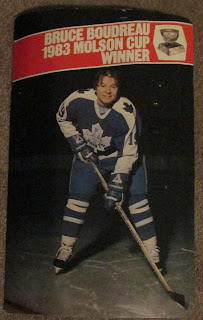 1984 Molson Cup Winner for the St. Catherines Saints. Bruce remarked that he has hair then. He was signing after a Q & A called Boudreau's Corner. He signed in blue on the darkest part on the right hand side. Looks better in person. I only saw him sign 4 and I got two. No problem. 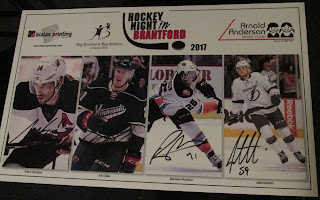 And  the piece de resistance. They had  these posters that these four local boys signed. Adam eHenrique (Burford),  Zac Dalpe (Paris), Brandon Montour(Oshweken and Jake Dotchin(Glen Morris). The line-up for this signing after the game was not too bad.The line moved pretty swiftly. No problem.

So I won't be writing about my annual experience at Hockey Night in Brantford anymore.

Well, let's have The Doors have the final word.

Hockey Night in Brantford's Facebook page had this photo posted of Boudreau's Corner. That's me in the corner, that's me in the spotlight (known as yellow shirt) with my bag of goodies---cards, posters,Sharpies. Publish my photo without permission. No problem.