Don’t you (forget about me)

And so it begins. The 30th anniversary of the detention date. This coming of age cult comedy classic.

Saturday, March 24,1984. Shermer High School, Shermer, Illinois, 60062. Dear Mr. Vernon, We accept the fact that we had to sacrifice a whole Saturday in detention for whatever it was we did wrong. What we did *was* wrong. But we think you're crazy to make us write an essay telling you who we think we are. What do you care? You see us as you want to see us - in the simplest terms, in the most convenient definitions. You see us as a brain, an athlete, a basket case, a princess and a criminal. Correct? That's the way we saw each other at 7:00 this morning. We were brainwashed.

I think I just watched it for Molly Ringwald. Something about red hair. And now she is a jazz singer and coming to a city near me. Hmmmm

My Charmed Mistress Who’s the Boss at Melrose Place

No, I’m not referring to my wife. I’m sure she fits one of those descriptions. But today I’ll be deviating a bit from my usual hockey autographs. 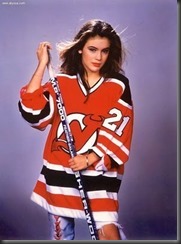 (this one’s for you Dave H)
During my hounding experiences, I have managed to obtain a few signatures of other celebrities besides hockey. One of those times was at the Wayne Gretzky Celebrity Tennis Tournament that was held here in Brantford during the 80’s. I have posted cards I got signed in previous posts. Here are two I got of Alyssa Milano. I believe she would have been around 14 at the time. But knowing that she would be there and I would have behind the scenes access, I was prepared. I took a couple of pages from my daughter’s teen magazines. Having attended a few of these events, I found this one no different. Gracious signers all. Anyhow, here are the pair.(of pictures) 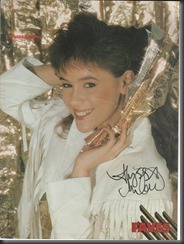 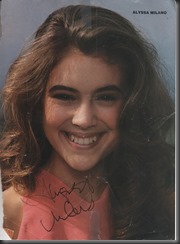 A change of pace from all the guys. I’ll probably show some more of these in the future. This is a past post that didn’t get posted as I had issues with Wordpress.

I was at the drug store the other day and noticed a small card display by the checkout. I picked up a few packs to soothe my itch (wasn’t picking up Benadryl cream) of the pack breaking kind. At 99 cents a pack, I considered that a bargain. 1 package with 08/09 UD series 1 and 2 packs with 08/09 OPC containing two packs. Hence, the title value packs. Now I’m not expecting to hit anything big but you never know. 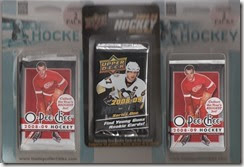 First up, Upper Deck. We all know what is possible in these packs. Here’s what I received. 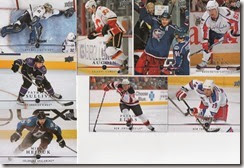 Now the first package of OPC. 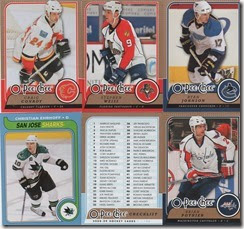 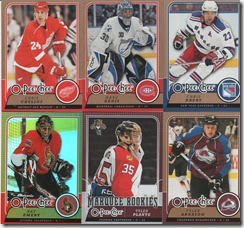 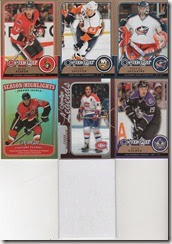 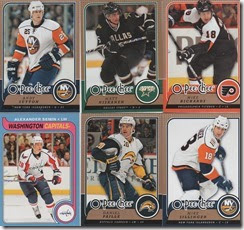 I’ll have to admit the decoy card got my heart racing a little.

Did I mention these were 99 cents a pack. I thought they were a value deal. Just thought I’d throw that in again.

I noticed there were also packs with Artifacts in it. Also ones with Pacific. I’m going to have to check this out again and see what they restock the display with.

This mail day made the opportunities I missed this week palatable. Before I show you the mail, I’m going to recount my last week. On Monday, Canadian Olympians Patrick Chan, Caroline Ouelette and Tessa Virtue and Scott Moir made an appearance at my place of employment. But since I now work from home, I don’t have the 1 1/2 hr one way commute to contend with. With the way this winter has been, it has been great. The timing did not work out for me so I couldn’t make it. Unhappy about this but not crushed.

On Friday, Hayley Wickenheiser was a guest speaker at the  Brantford Home Builders Assocaition luncheon

Since this was a luncheon I was working (at home) at the time, again timing did not work with me and I was forced to miss this event also.

Somehow, the much maligned Canada Post saved my week. I went out to the community mailbox (already have them now, rest of Canada) and found this. 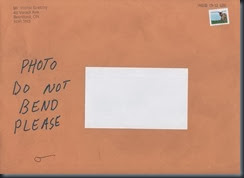 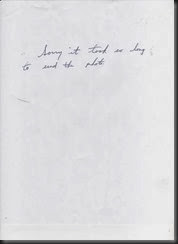 Adding to the mystery was the enclosed note.

Now the old wheels started to chug.  I recounted  here on my obtaining a gift (indirectly)  from Walter. There was also something else in the envelope. A receipt from McDonalds with my name and address written on it. He had already hand delivered the photos to our guest in 2012. He must have had this somewhere since then and thought he had promised a picture. Sent and received. This is the kind of surprise that I like. The gift that keeps on giving. And here it is. 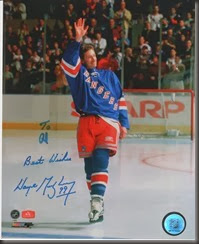 A different photo from the one I received earlier so that’s a bonus. You can tell the inscription is in a different colour marker and appears to maybe have been traced over. Still a nice way to end one week and start another.

Now I’ll be watching that mailbox for things other t than bills, coupons, reminders.