This, according to my blogger stats, is my 400th post. I'm sure it's the same with many of you, when you hit a milestone post, how did I do it? Anyhoo, here's to the next 400.
After reading Brad's post at Cards from the Crease
http://cardsfromthecrease.blogspot.ca/2012/04/presstine-marketing-mystery-tear.html
I headed to my local Dollarama to see what they had in the way of card stuff. Beside the mystery packs, they had some Cartes de Hockey Cards Boite de surprise box. These are put out by Presstine Marketing Inc.
http://presstinemarketing.com/

Their goal of bringing value and excitement back to the sports collectibles marketplace is in this box. An assortment of original sealed packs, card protectors and Presstine repacks. And only $2.00 plus tax.
First up, a pack of 50 soft sleeves for the cards. Just what every collector needs. 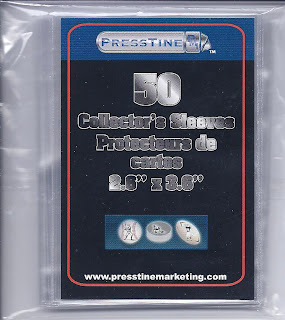 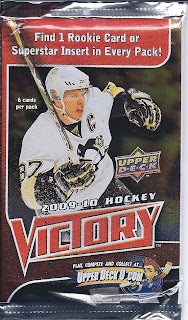 CONTENT HIGHLIGHTS: - FIRST ROOKIE CARDS OF GUYS WHO PLAYED AT THE END OF 08-09! - PULL AN AVERAGE OF 1 ROOKIE OR SUPERSTAR INSERT CARD FROM EVERY PACK! - FEATURING 200 STAR-STUDDED REGULAR CARDS! - COLLECT LIMITED GOLD AND BLACK PARALLELS OF THE ENTIRE 250-CARD SET!

Introducing my six pack (of cards). 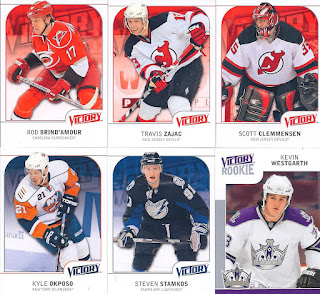 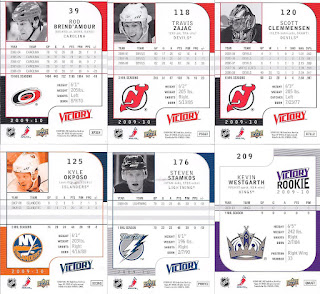 For my repack, a pack of 5 original cards titled Best of the 2000s. 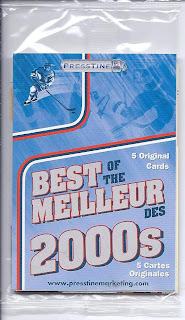 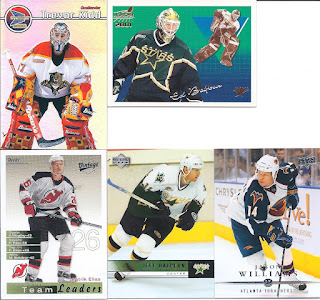 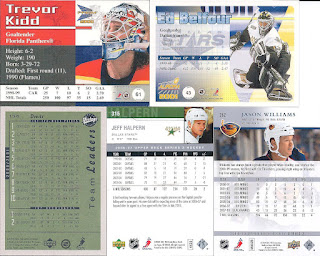 For my next repack,a Hockey Edition Memorabilia Edition containing 1 autograph or jersey card. 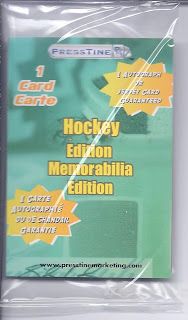 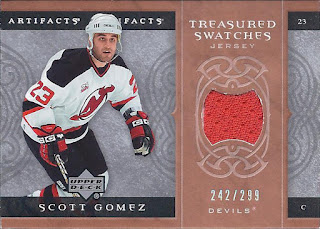 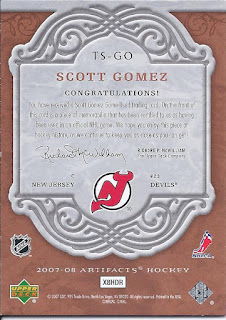 For those who don't know:
Kraft Hockeyville is a Gemini Award-winning Canadian reality television series developed by CBC Sports and sponsored by Kraft Foods, the NHL and the NHL Players' Association in which communities across Canada compete to demonstrate their commitment to the sport of ice hockey.
Stirling-Rawdon ,Ontario is Kraft Hockeyville 2012!
Winning the title includes the following:
Stirling-Rawdon will host a preseason game this fall between the Toronto Maple Leafs and Columbus Blue Jackets, receive $100,000 in arena upgrade money from Kraft Canada, and enjoy a visit from CBC's Hockey Night In Canada. The town will also receive $10,000 in food bank donations from Kraft Canada.


Someone was cleaning out their desk on my floor at work and I found this felt pennant advertising the 2008 Hockeyville contest.

Has the Hockeyville logo in the top left and on the bottom right, the copyright for the NHL,NHLPA and CBC.
Does anyone still collect these? I don't know but here are a few from my collection.

Minnesota North Stars--This did have a Brian Bellows blue ink auto but it has faded.

I guess they do but I imagine a lot of people have those car flags now to show their support. Golly gee, I have me some of those too.

The following may contain images that may be disturbing to viewers of all ages.. 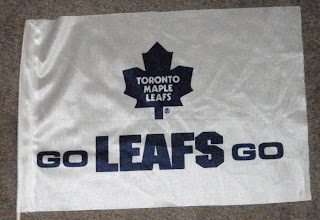 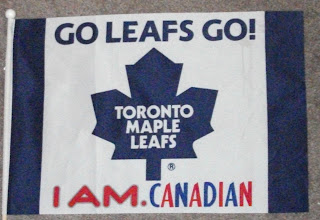 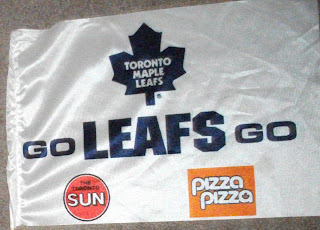 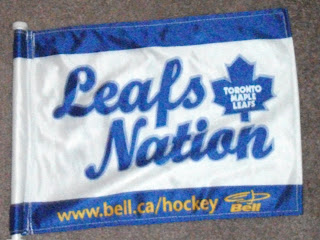 That's FOUR (4) different Leaf flags. These were from a best of times, from the winter of hope, not the spring of despair. Leaf Nation, our time will come again.
﻿
Posted by hockey kazi at 11:34 PM No comments:

To every season, turn turn turn

The Leafs are now entering one of the hockey seasons. The off season. We went through the pre-season and regular season. Missed the post season. Three out of four ain't bad.

So the playoffs are near .  Again this year, no playoff beard for me. Used to be fun in the old days. Couple of months growth and gaining some minutes by not shaving. (makes the wife happy) Sigh. But all is not quiet on the Leafian front. Sam Carrick and Spencer Abbott have signed entry level contracts. Woo hoo.

﻿
Former Leaf equipment man Scott McKay suited up for the Leafs in their
Thursday March 29 against the Flyers.
The Leafs signed him to an emergency one day Amateur Tryout Contract -- something that would have let him sit on the bench as a back up goalie or to come into the game if the situation presented itself.
While cooking dinner for his four-year-old twins --Henry and Ella - he received a text telling him Jonas Gustavsson had been hurt in the warm up and that he might want to get his equipment together. When he got there, they had a Maple Leaf sweater that had the #73 and he put on his own gear and waited in the dressing room for the call. Minor league goalie Jussi Rynnas was thrown at the last minute into the starter’s role and Gustavsson stayed on the bench, despite being hurt. If Rynnas was hurt in his first NHL start and Gustavsson couldn’t go, the Leafs would have had to go to McKay
McKay said the “Leafs also treated me great. I really appreciated the opportunity” because pulling on that blue and white sweater is “every Ontario boy’s dream.”
Scott McKay is one of the special, rare few who can say they actually did it while under contract.
I have an hour and twenty minute commute each way to work and back. Thank God that there are two sports radio stations that I can listen to. Why just this morning I got to hear Randy Carlyle's 1/2 hour end of the season press conference. This was followed by Brian Burke's 1/2 hour end of the season press conference. This was after reading in the paper an open letter to Leaf fans from the Leafs owners. From Carlyle, I learned the Leafs lacked confidence. From Burke, the Leafs need a goalie, a centre and some truculence. Hello 2009,2010 and 2011. Then tonight I got to listen to the NHL lottery draft. The Leafs stayed at number five. Burkie had nothing to say to the two dozen reporters there.
I then listened to the rest of the Jays game. Another victory and another parade route being planned. Makes the ride enjoyable as I don't like hearing myself sing.
Posted by hockey kazi at 11:21 PM 1 comment:

The Hockey News says twice-convicted pedophile Graham James has returned a plaque the magazine gave him in his heyday as a junior coach. That happened recently when James approached a longtime NHL scout and asked him to return the plaque to The Hockey News.
The hockey publication declared James “man of the year” at its annual awards luncheon in June 1989. The “man of the year” accolade was given to James for his stance against violence and for leading the Western Hockey League's Swift Current Broncos to the Memorial Cup less than 2 1/2 years after a bus crash took the lives of four players.
It appears that after the luncheon, James “later that night sexually assaulted Sheldon Kennedy in a hotel room paid for by The Hockey News.”
Columnist Ken Campbell says The Hockey News stripped James of the award when he pleaded guilty last December to the latest sex assault charges against him.
James was sentenced last month to two years in jail for sex assaults on retired NHL star Theo Fleury and his cousin Todd Holt when they played junior hockey in the 1980s and ‘90s.
James previously served about 18 months of a 3 1/2 year-sentence in 1997 for molesting former NHLer Sheldon Kennedy and two other players before he got out of jail in 2000 and dropped out of public view.
In 1998, Kennedy roller bladed across Canada to raise awareness and funds for sexual abuse victims. 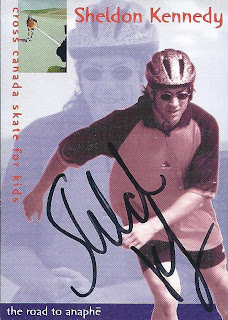 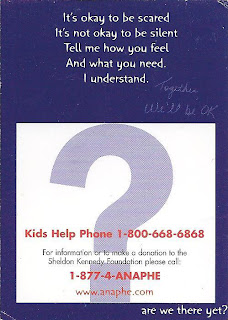 Most of you probably know the Mike Danton story but if you don't, you can look it up and read about this bizarre tale.

“Heading to Toronto on April 1st,” Danton tweeted. “Would love to run into, or over, @simmonssteve.”
@Simmonsteve is Toronto Sun columnist Steve Simmons. Last year, Simmons published The Lost Dream, a book about Frost and the unfortunate young people lured into his orbit.

After spending 5 years of a 7 1/2 year sentence in the US, on March 19 2009 his request to be transferred yo a Canadian prison was granted. On Sept 11 2009, he was granted parole.
In fall 2009 he applied to Saint Mary's University in Halifax, Nova Scotia for January 2010 entry. Danton initially enrolled in three courses for the winter 2010 semester and joined the Saint Mary's Huskies varsity men's hockey team. On March 28, 2010, the Saint Mary's Huskies defeated the Alberta Golden Bears to win the 2010 University Cup.  On October 4, 2010  Danton was named an Academic All-Canadian based on a student CIS athlete achieving a grade point average of 3.7 or higher. Danton achieved a 3.9 GPA overall.
On December 17, 2011, Orli Znojmo of the Erste Bank Eishockey Liga announced the signing of Mike Danton. He will spend the remainder of the season with the South Moravian club.
Now he doesn't appear to be brain deficient but Danton is left having reinforced the image he appears to want to dispel. That’s his punishment.
Twitter allows more people to read stupid thoughts.
And this is no April Fool's joke but he might look like one.
Posted by hockey kazi at 7:17 PM 3 comments: