While perusing the online version of The Hamilton Spectator last week, I discovered that the Erie Otters of the OHL were going to hold training camp in nearby Ancaster. Apparently, there home arena, the Erie Insurance Arena is under renovation. There had been some talk of the team moving to Hamilton so maybe they're testing the waters. Upon checking out the coaching staff, I discovered Robbie Ftorek is the head coach and Peter Sidorkiewicz is an assistant.
I read the following story after my hounding experience.  That may explain why he was on his cell phone after getting off  the team bus. Being away from family during these times is tough but he still has hockey.
http://www.goerie.com/article/20120829/HOCKEY01/308299951/Otters-coach-Ftorek-doesn%27t-slow-down-despite-personal-tragedies?utm_source=dlvr.it&utm_medium=twitter
So what did I get today. I already had all of his cards signed when he coached the New Haven Nighthawks in the AHL. 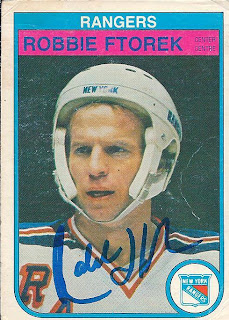 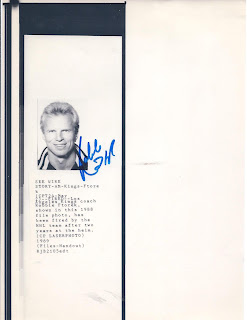 A wire photo from my collection. It's a head shot to go with the story when he was fired by the Los Angeles Kings. 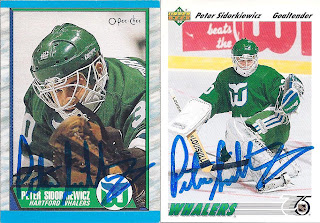 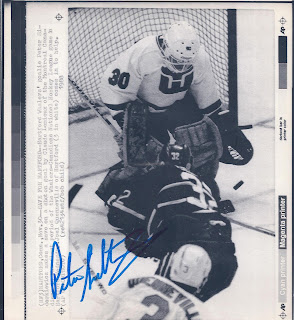 Wire photo from my collection. Now I had remembered seeing some of "Sid's " photos(that's the name on his jacket) and pulled out 5. (I also found the Ftorek which just happened to show up when I was looking through them). I gave Peter the others and got this one signed. He was looking at them with someone who I think was the trainer and got quite a chuckle.
My first IP in a while and pretty successful. Of course, I think I was the only one there for the inter-squad game besides the parents and sportswriters. I'm going to try and make it down before week's end. Maybe I can get a Connor McDavid auto.