It was 40 years ago today

before 18,818 fans at the Montreal Forum, the Summit Series began. I suppose it's appropriate for me to continue on highlighting the 92 Future Trends card set commemorating this event.
Paul Henderson will be celebrating from his home, not with his former teammates.
http://www.ctvnews.ca/sports/henderson-marking-summit-series-anniversary-from-home-1.939877 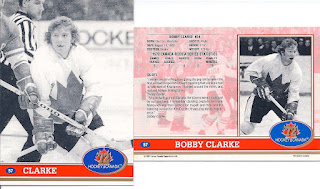 # 57 Clarke
"Team Canada '72 is right at the very top of my hockey life. I always considered winning the Stanley Cup more important, but certainly, they're close to being equal" 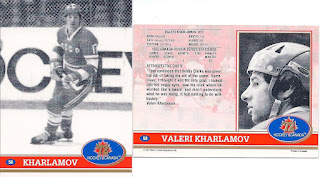 # 58 Kharlamov
On August 27, 1981 he died from injuries that occurred as a result of a terrible car crash as he and his wife were returning from a summer's vacation. 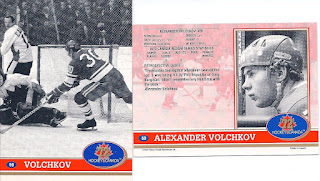 # 59 Volchkov
"I remember feeling that whenever I was on the ice, i was being hit by Phil Esposito or Gary Bergman. I don't remember any free time with the puck" 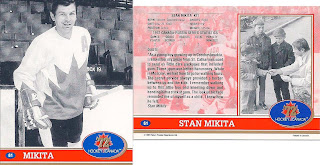 # 61 Mikita
Mikita was born Stanislas Gvoth in Sokolce, Czechoslovakia, on May 20, 1940. To give their middle child a better life away from the Communists, his parents allowed him to be adopted by a childless aunt and uncle, Joe and Anna Mikita, 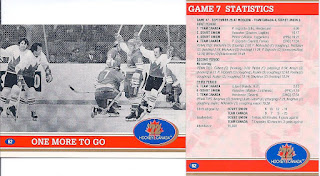 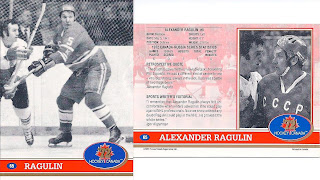 # 65 Ragulin
Ragulin was inducted into the IIHF Hall of Fame in 1997.
Alexander Ragulin passed away November 17th, 2004 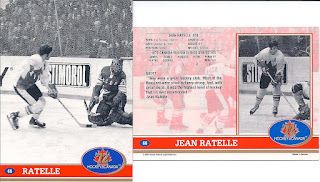 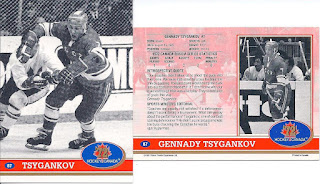 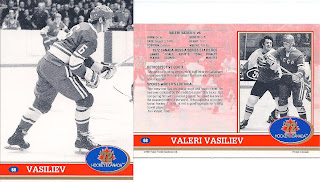 # 68 Vasiliev
Vasiliev scored one goal in the tournament. It proved to be the final Soviet goal of the tournament.
In 1998 he was inducted into the IIHF Hall of Fame.

# 69 International Dialogue
Esposito/Рагулин
Clarke/Мальцев
The old gap tooth and wink will do it every time.
Posted by hockey kazi at 4:42 PM