I’ve haven’t been posting as much as I used to. As with pretty much everyone else, other things get in the way and take precedence.But I hope to be a more frequent blogger now. For one thing, after about four years, I’ve finally been approved to work from home. I’ve now almost completed the first week and I’ve got to say, I love it. Of course, there are pros and cons. The biggest thing for me is not having to do the daily 3 hour round trip commute. Even I can only stand so much of me singing or talking back to the sports radio station. But at home, I do enjoy my company. What’s not to like. I will also try and get more involved in the collecting community. I’ve still got a lot of stuff to bring to show and tell. Lets start now.
My sister and brother in law were cleaning out some books and wanted to know if I wanted any. I took a few that included some sports books. 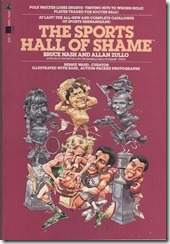 The authors of four Hall of Shame books that highlight strange and embarrassing moments in baseball and football, Nash and Zullo now turn their sights on a variety of other sports. From the world of golf, they recount the time during the 1968 Masters when Tommy Aaron erroneously added a stroke to partner Roberto de Vicenzo's scorecard, resulting in de Vicenzo's loss of the tournament to Bob Goalby. In racing, they note Kevin Cogan's dubious distinction of having caused a four-car crash at the 1982 Indianapolis 500 on the relatively slow 80 mph pace lap. They reach back to 1853 to tell the story of heavyweight boxer "Yankee" Sullivan, who was ruled the loser in a bout for failing to answer the call to fight because he was busy punching his opponent's second. And they recall the snooze that lineswoman Dorothy Cavis-Brown took during a match at Wimbledon in 1964, to the crowd's amusement. The authors' energetic style and humorous anecdotes will make this a popular title for jocks of all stripes.
Copyright 1987 Reed Business Information, Inc 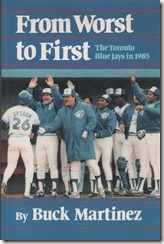 Publication Date: January 1, 1985
It was not an unusual play, at least for me.
I was just blocking the plate, trying to save a run in a scoreless tie.
Nothing heroic.
Nothing foolish.
Just trying, as I had since joining the Jays in 1981, to remind a runner that in any game against Toronto, home plate belonged to Buck Martinez, and no one else.
It’s a play that gets me hit on more occasions than I have time to count. I’ve been run over, knocked down, and even (several times) knocked out; but I’ve always escaped unscathed, unhurt, determined more than ever to protect that very private piece of turf I call my own.
That’s just the way I feel about home plate.
My teammates know this. The players with the other clubs know it. I’d even guess that most baseball fans who have ever seen me play know it too.
It’s not just home plate, it’s my home plate.
The only trouble on that fateful night in Seattle’s Kingdome, was that somebody had apparently
forgotten to tell Phil Bradley.
From spring training to season end, Martinez writes about the players, the coaches, the key games and the emotion of the team winning its first championship.
Buck’s story is sprinkled with first hand commentaries: the Bell-Kison incident, both crucial series against the Yankees, the best game the Jays ever played and post season games down to the final out. 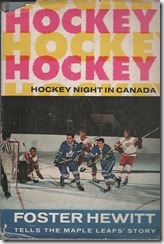 This is the revised edition of the October 1953 edition.
One book with stories of many different sports and books of my favourite Toronto teams, the Blue Jays and Maple Leafs. Looks like some good summer reading lies ahead for me.