I read with interest  when 2011 Parkhurst Champions Hockey announced a wire photos insert set last year. Besides being a novel idea for a card, it reminded me of the wire photos I have. I received these from the local newspaper where I was living in the late 80's. I had read an article in Sports Collectors Digest that one of the columnists had picked some up and opined that they would make a nice oddball collectible. I was right on top of that.
FREE. SPORTS. COLLECTIBLES.

For the benefit of the uninitiated
A wire photo is a photographic image that was transmitted from an agency to a subscriber via telegraph or telephone wires, and later, via satellite. Different agencies (AP, CP, Reuters, UPI) trademarked different terms, including Wirephoto, Telephoto, Laserphoto, Laserphoto II and others, that corresponded to their wire photos. The process was similar to sending and receiving a fax, where the photo was scanned in at one location, transmitted over "the wire", and printed at another location.  Each of these processes worked in the same general manner. At the sending station, a typed caption was prepared and pasted to the border of the original photograph. It was then inserted into the sending machine (usually wrapped around a drum) and transmitted. At the receiving end, photo paper was then exposed with the transmitted image and the caption information became a part of the photographic image. Wire photos were printed on special, thin paper, rather than developed in a traditional darkroom. The resulting print has a tendency to fade and turn brown much quicker than gelatin-silver prints. With the advent of digital photography, the wire photo is truly an artifact of a bygone era. 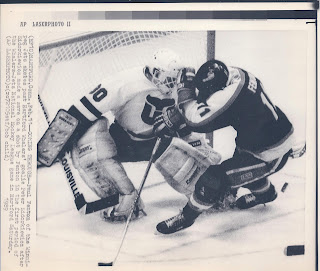 Here is a sample. Laserphoto II AP.  This is from a Feb 11/89 game featuring the Hartford Whalers vs the Winnipeg Jets.

I got a few of these signed. Remember this was before the hockey card explosion with all the new companies. There wasn't a lot to get signed so this fit the bill perfectly.

Just like Parkhurst Champions, I have single signed ones. 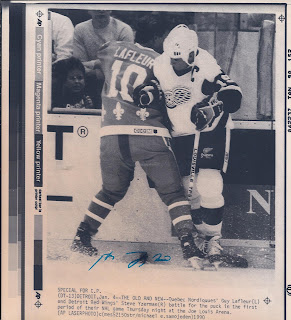 Guy LaFleur signed blue sharpie TTM. I have a few different signed ones of The Flower and a few other player. I did have some dual signed ones which I have sold previously. 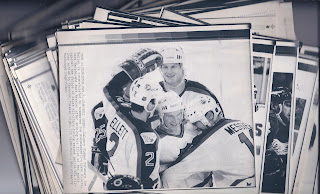 I just grabbed a handful from the 1989 season. I actually counted this pile and they totalled 141. Looking at the boxes I have, I must have at least 10,000 of these. I'm now making these available for sale. Most are from the 87/88, 88/89 and 89/90 seasons. Do you have a favourite player or team? Did you see a game live, have the ticket stub or program and want  photo from that game. Let me know and we can work something out. They're not really 1 of 1's as a lot of newspapers got these. But they may be unique as there aren't a lot still around. You can check online to see what these are going for. BTW, I also have some baseball, football, basketball and some other sports also.
Posted by hockey kazi at 6:27 PM