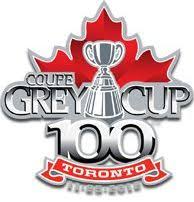 
Today's Grey Cup (La Coupe Grey) game is the 100th to be played. This pits the winners of the East and West divisions to determine the Canadian Football League champion.
My personal journey began as a child of around 8 years old..
I have a photo somewhere of my brother and myself emulating our heroes. Will have to find that and insert later.
My first game was the Labour Day Classic between the Toronto Argonauts and my hometown Hamilton Tiger Cats. (Ti-Cats 21 Argos 19). Even at that age, I collected as I still have  the program and ticket stubs. I'll have to dig that up sometime.

I played for the Schwenger Alouettes in the Hamilton Old Boys Football League. I remember being revived with smelling salts a couple of times. I believe now that I had a concussion or two. One time I had a headache for a few days and was feeling sick. With the equipment in use at the time, it's a wonder there weren't more serious injuries. I still have my jersey from those days. The Al Bundy in me. 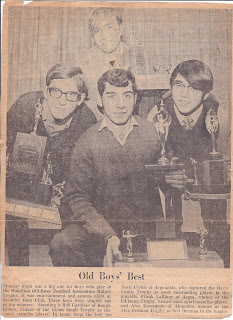 Photo of me with trophy for best lineman.
In conjunction with the 100th Grey Cup, there was a Grey Cup train that travelled across Canada. It made stops so you could get autographs from CFL alumni and your photo with the Cup. It made a stop nearby me so I was there for the 9:00 am stop. I got there a little early to scope out the proceedings as I still had to go to work. Right away, there was a breakfast being served. Coffee, orange juice, pancakes, sausage and peameal bacon.  CFL alumni were walking around and I got these autographs. They seemed to like the CIC's that I made. 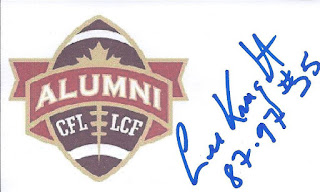 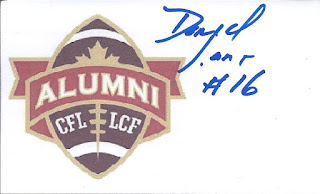 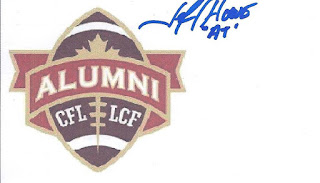 He wore his Grey Cup rings from both the Argos and the Tiger Cats. 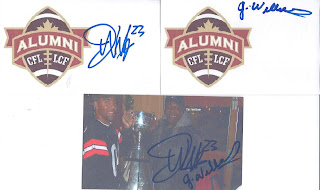 John Williams Sr
John Williams Jr
John Williams Sr and Jr are the only father and son tandem to win Grey Cups. Luckily I checked the site the night before and found out who was signing. Printed this photo to get signed. Jr also wore his Grey Cup ring from the 2004 Argos. That thing was HUGE.
But the big draw for me was to have my photo taken with the Cup. Since it was early morning of a weekday, there were not a lot of people there. I was third in line to have my picture taken. (after I had a second breakfast helping--there was a lot left over). Unfortunately, somehow I did not receive my photo. They e-mailed it to my e-mail address but nothing. I have e-mailed them back to see if I can get it re-sent. But here's a buddy of mine that received his. Hopefully I get mine as I have cherleaders with me and the Cup.

And if you were watching ,did you hear Burton Cummings rendition of the national anthem. I wish I hadn't been watching.
Posted by hockey kazi at 8:36 PM