Selected by Buffalo Sabres round 12 #245 overall 1985 NHL Entry Draft.
Ken Baumgartner was told he wasn’t good enough to play hockey at the junior level, let alone in the NHL. That only inspired "Bomber" to prove the "experts" wrong.

Bomber was never confused with the more skilled players on any team he played on, even before he made it to the junior level.
A defenseman until he reached the NHL, Baumgartner had little tangible skill according to scouts. His skating was horrendous, despite hard work to improve it. Below average speed and mobility made it easy for better skaters to burn the large blueliner. He had a poor shot, always rushing his release which resulted in an easy save or a wide shot. Although Ken was good at reading the oncoming attack, his lack of patience hindered him. He quickly would lose his composure and positioning as he wanted to flatten the puck carrier. That of course resulted in a big hit by Baumgartner, but usually not before the forward dished the puck off to a wide open teammate resulting in a great scoring chance against his team. He was a punishing hitter, although it took him a long time to learn how to be an effective hitter. He was also a willing fighter, often initiating fisticuffs. Make no mistake about it, fighting is the reason Bomber made it to the NHL, and the reason he stuck around so long.
The odds were against Ken Baumgartner ever making the NHL. There were far more talented players through out history who were not good enough to stick in the league. But the desire to succeed, the willingness to sacrifice, and the heart and effort that Ken showed earned him a lengthy NHL career. 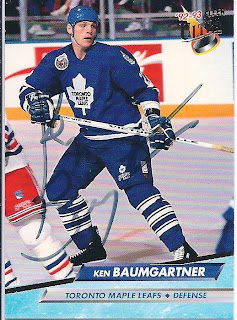