Selected by Toronto Maple Leafs round 4 #74 overall 1980 NHL Entry Draft.
After a brief tryout, the Leafs dispatched him to the New Brunswick Hawks of the AHL to refine his game.
Over the next two campaigns, Gavin picked up an increasing number of games with the Leafs. But it wasn't until 1983-84 that he became an NHL regular. At that time, he became the Blue and White's designated checker and penalty killer. But the team was stuck on a losing track year in and year out. In 1985, the team sought to bolster its defensive corps by surrendering Gavin to the Hartford Whalers in exchange for blueliner Chris Kotsopoulos.
As a Whalers, Gavin attained his best overall results. He continued to excel at his defensive game while lifting his offensive numbers to a personal best 55 points in 76 contests during his first season with the club. But in 1988, he was claimed on waivers by the Minnesota North Stars. There he continued to perform as a defensive forward until he blew out his knee in 1993. On the advice of his doctors, he retired for a season to work as a scout, but discovered that his knee was responding better than anticipated.
In 1994-95, he staged a comeback with the Toronto Maple Leafs that led him only as high as a minor-league stint with Kansas City and Minnesota before he packed it in for good in 1996. 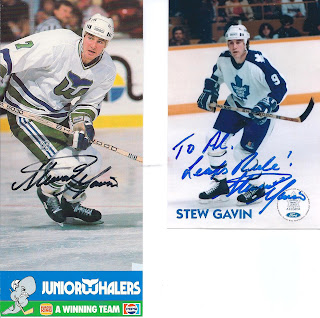 ﻿
Also included the Junior Whalers team issued card.
The blue sharpie signed Leafs alumni card received IP. This was about 5 years ago. I was working in downtown Toronto and took the GO train out of Union Station. Apparently before some Leaf home games, they has a Leaf alumnus signing outside the ACC. I happened to be walking by, saw the opportunity gto get an autograph and jumped on it. Never saw or heard of another  chance and I'm not working downtown anymore.﻿
﻿
Posted by hockey kazi at 10:44 PM