St. Patricks Day and my middle daughters birthday. She was kind of the genesis for my autographed birthday card of  the day last year. Coming to an end soon.

Once "Rammer" caught on full-time with the Buffalo Sabres in 1972-73, he played ten-straight seasons with perfect attendance. During that time he became one of the league's premiere defensive forwards. Ramsay didn't have a great amount of natural ability. He wasn't very fast and wasn't a great stickhandler or shooter by NHL standards. But he was a smart player who worked hard. He was an intense competitor who did a lot of hard work that went unnoticed by the average fan but to his teammates he was invaluable. Craig showed up night after night shutting down the opposition. You didn't see Ramsay make many mistakes
For his fine defensive play Craig was awarded with the Selke Trophy in 1985. He also finished as the runner-up for the Selke Trophy on three other occasions. He was also selected to play in the 1976 All-Star game. 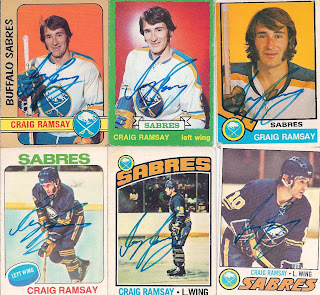 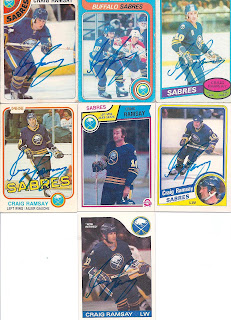 Received these blue sharpie and one red ink signed cards IP at the NHLSloPitch tourney.
And you just have to love those sideburns.
Posted by hockey kazi at 11:56 PM