Selected by New York Rangers round 4 #62 overall 1977 NHL Amateur Draft.
Defenceman Mario Marois was a fine playmaker with a hard shot from the point that also thrived by playing it rough in his own end. During his first full season in the NHL, the scrappy defender scored 31 points and showed poise while helping New York reach the Stanley Cup finals. He duplicated this point total the next year but his defensive play fell off. The Rangers opted to trade Marois to the Vancouver Canucks early in 1980-81 since they had a glut of bodies on defence. In March of that season, the rugged blueliner was sent to the Quebec Nordiques where he settled in for nearly five seasons. He served one season as a player-assistant coach of the Hamilton Canucks of the AHL in 1992–93 before retiring as a player.
He played in 955 NHL games and scored 76 goals and 357 assists with 1746 penalty minutes. In the playoffs he played 100 games with 4 goals, 34 assists, and 182 penalty minutes 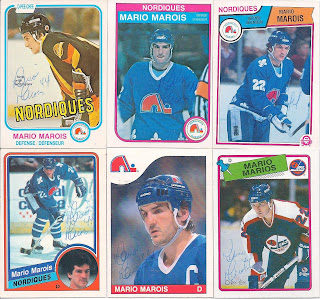 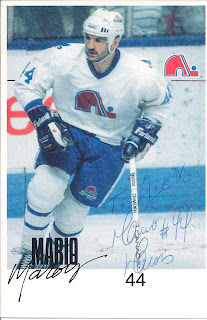 He also included this signed Nordiques postcard.
Also note that his rookie card, 81/82OPC #279 has him pictured in a Canucks jersey and the traded line "Now with Nordiques".  That would probably never happen now.
Posted by hockey kazi at 11:21 PM