The Quebec born Picard - who was given the name Noel because he was born on Christmas Day, played junior for the Peterborough Petes, a Montreal Canadiens farm team and was buried in the Canadiens system for most of the 1960s. Come expansion in 1967 he joined the Blues for 5 seasons, and became a fan favorite.

It is perhaps the most famous photo in hockey history. Bobby Orr flying through the air, like the Superman he almost was. His arms up in victory, as he just scored the Stanley Cup winning goal of 1970.
Those in the background are also immortalized. Glenn Hall is the goalie who gave up the goal. And a young defenseman named Noel Picard is guilty of hooking Orr's leg's, propelling his jump into flight.
He went on a hunting trip in Novemeber of 1971. While his mates were relaxing in the cabin, he hopped aboard an old horse for a trot around the area. But a second horse got tangled with the first causing Picard's transport to fall to the ground with his foot caught squarely under the old mare's rump. By the time the horse got up, Picard's foot was crushed so severely that three bones were seen protruding through his boot. Hours passed before he was finally admitted to a St. Louis hospital. The doctors were seriously contemplating an amputation, but decided to at least attempt to save some aspects of the original foot. 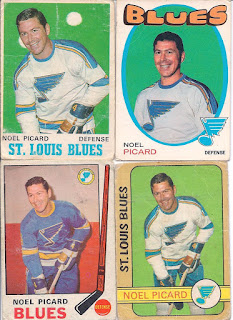 Merry Christmas to all.
Posted by hockey kazi at 11:41 PM