Selected by Toronto Maple Leafs round 1 #6 overall 1986 NHL Entry Draft.
In his rookie season, Damphousse played in all 80 games and tallied 21 goals and 25 assists for 46 points. The breakout year offensively for Damphousse came in 1989-90, when he scored 33 goals and finished second in team scoring with 94 points. In 1990-91, he paced the team with 26 goals and 73 points and was named the MVP of the NHL All-Star Game in Chicago thanks to a four-goal effort. He still regards that as the single greatest memory in his NHL career
In 1991-92 he joined Edmonton in a package deal which saw the Leafs acquire the legendary Glenn Anderson and Grant Fuhr. Damphousse led the Oilers in scoring that season but was then moved on to his hometown where he played with the Montreal Canadiens in 1992-93.
It turned out to be a great move for Damphousse as he spent 7 wonderful seasons in Montreal highlighted by a Stanley Cup victory in 1993 and later being named captain of the fabled team. He was also asked to represent Canada at the 1996 World Cup of Hockey. 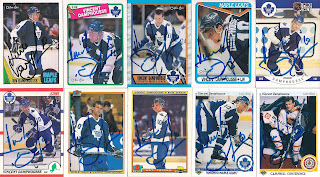 Received these blue sharpie autographs IP.  He was doing an appearance at Midas Muffler in Brantford in the 90's. I also got a colour postcard and 2 of my wire photos signed. I'll have to find them and post them another day.
Posted by hockey kazi at 10:38 PM