So instead, I'll show some Soviet (Red) autographs. These were obtained IP during the 1991 Canada Cup in Hamilton. This is where I received the Fedorov and Tikhonov that I showed earlier. Since I didn't have any cards or bring any extra paper, I got the 400 count box of cards I had with me signed. Can't read it and don't know who they are but I got em. 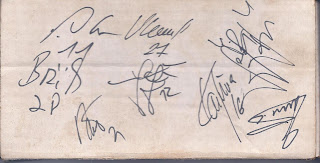 I suppose I could check the rosters and see who I think might have signed. At least a few of them also wrote their number down. Unless one of you readers can recognize them and save me the trouble.
Posted by hockey kazi at 11:34 PM